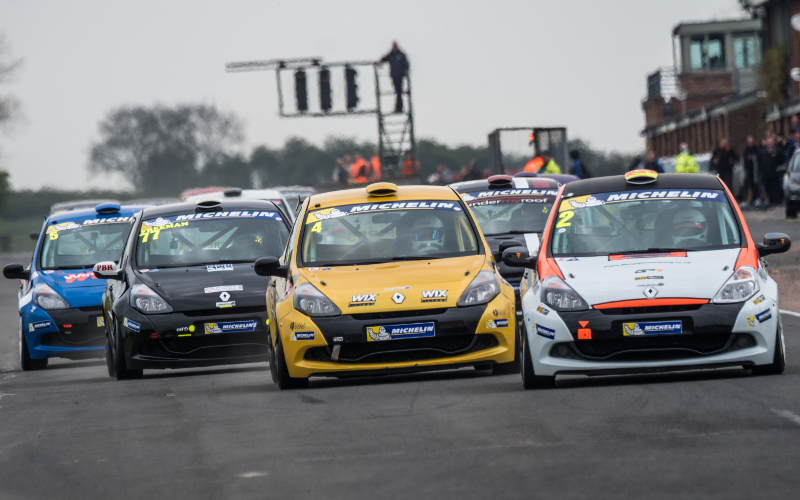 This season’s edition of the Michelin Clio Cup Series will go down as one of the most close-fought and action-packed years in the championship so far, and a look at the numbers brings up some fascinating statistics and some record-breaking achievements from across the campaign.
There have now been 65 races in Clio Cup Series history across five seasons, with the addition of 2017 victors Ben Palmer and Anton Spires making it sixteen different race-winners in the Race Series and no less than 31 separate podium finishers.
Luke Herbert continues to be the most successful Race Series driver in history with eleven victories to his name, though Palmer is just one win behind following his successes this year, which secured him a new record for the most wins in a Race Series season.
In fact, Palmer’s sensational consistency this year would lead to him making championship history as the first driver in either class to finish every single race on the podium, with his fifteen rostrum finishes setting a new Race Series benchmark for most podiums in a campaign.
Palmer’s title sparring rival Spires meanwhile was one shy of equalling James Dorlin’s record of eleven pole positions in a campaign, whilst both he and Palmer took seven fastest laps this year which means they are the new joint record holders for most in a season.
Over in the Road Series, there were no less than eight different podium finishers this season, meaning that there have been a total of 24 drivers to finish in the top three in the class during the last five seasons, thirteen of whom have won races.
Three-time runner-up and now 2017 champion Nic Harrison leads the way with a record-setting thirteen race wins and 38 podium finishes in his Road Series career, his closest competition being eleven time winner Luke Pinder and Jake Honour with twenty podiums.
Harrison also broke his own series record for the most Road Series pole positions in a season with twelve, while 2017 vice-champion Shanel Drewe would impress herself as she equalled 2016 champion Jack Fabby’s class record of thirteen podium finishes in a season.
The lead overtaker on the grid this season meanwhile would be Road Series star Drewe, who gained eighteen places from her grid positions. The next best in class was James Joannou with thirteen, while Sean Thomas and Tom Oatley were the only others to move up double figures.
Leading the way in the Race Series meanwhile was Simon Freeman with eleven, one ahead of Tyler Lidsey. Title contenders Spires and Palmer would take nine and seven respectively, while interestingly Ben Colburn would only gain one place across the fifteen race campaign.
The king of qualifying across the two classes was Harrison, whose average of 1.14 just edged out Palmer (1.71) and Spires (2.00). The next best in the Road Series were Thomas (2.70) and Drewe (3.00), with Race Series contenders Ben Colburn (3.50) and Freeman (3.60) following.
The final meeting of the season would see James Colburn spoil Spires and Palmer’s monopoly over laps led during the season, however Palmer still ended comfortably ahead with 142 laps led and 241.93 miles led to Spires’ 61 laps and 102.63 miles, while Colburn notched 18 laps at 33.31 miles.
Five different drivers led races in the Road Series meanwhile, with Harrison leading the way with 106 laps led ahead of Thomas (48), Drewe (40), Robinson (14) and Richard Colburn (12), while Harrison’s 182.6 miles led was well clear of Thomas’ 75.6 and Drewe’s 72.87.
In case you missed it, our report on the nail-biting season finale at Silverstone earlier this month can be found by clicking here, while the final championship standings can be viewed here.
Image from Phil Laughton Photography.
< Back to News