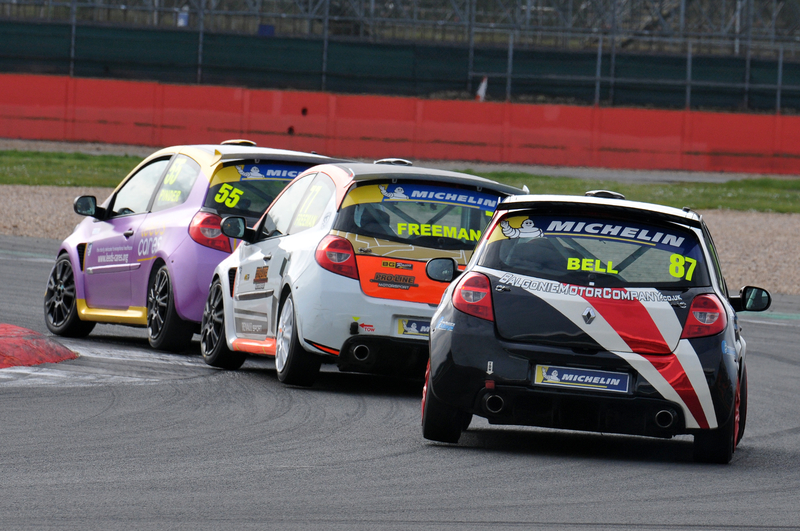 The scene is set for the next chapter in this seasons Michelin Clio Cup Series title fight as the category returns to action at Brands Hatch this weekend [11-12 May].

Silverstone raised the curtain on the 2019 campaign five weeks ago, with Jade Developments’ Luke Pinder and Pitbull Racing’s Simon Freeman sharing a maiden victory apiece, though a brace of fastest laps for the latter hands him a narrow 2-point advantage at the top of the standings.

Pinder’s absence from this weekend’s triple-header in Kent could prove pivotal in the race for the title, but Freeman will still face plenty of opposition from the chasing pack behind.

Scottish duo Ronan Pearson and Paul Bell – both running with multiple champions Westbourne Motorsport – lead that cohort at present, the pair tied for third overall after a podium each at the ‘Home of British Motorsport’ after some thrilling wheel-to-wheel action.

The 1.19-mile Indy circuit was a happy hunting ground for then-rookie Pearson in 2018, with pole position and a podium finish his reward twelve months ago. He will be looking for a maiden victory in the 2.0-litre, third-generation RS Clio 200, with Bell similarly aiming for the top step after a strong start to the season.

Tony Verhulst (Westbourne) and MRM’s James Joannou round out the Race Series contingent, the pair looking to build on a brace of fifths and sixths respectively last time around.

Fresh from making history as the first – and only – driver to win a race in each class of the championship, James Colburn will be aiming to continue his dominance in the Sport Series, racing a fourth-generation RS Clio 220 for family outfit Westbourne.

But, with Renault UK Clio Cup regular and series newcomer Aaron Thompson entering the fray, plus the rapid Tyler Lidsey (MRM), Colburn has a fight on his hands to repeat his Silverstone double.

The grid is completed by a trio of Road Series entries, with defending class champion Nic Harrison (CGH Imports.com with Jade Developments) looking to bounce back from a frustrating mechanical problem in the final race last time out.

Richard Colburn (Westbourne) will also want to grace the top step for a second successive meeting, but both will first have to play catch-up to Darren Geeraerts, who currently heads up the standings by two points after a podium double at the season opener.

A shared practice session with the MGOC Championship kicks off the weekend’s action at 10:30 on Saturday, with that all-important qualifying session to follow at 16:05.

Three races are scheduled for Sunday in a value-for-money gesture by the organisers, set to get underway at 11:05, 14:15 and 16:35 respectively – though only the first two will be valid for championship points.