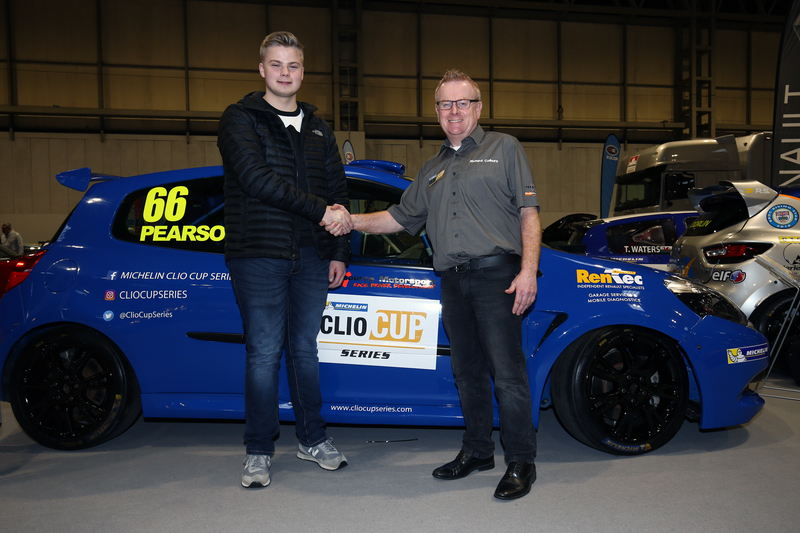 Ronan Pearson is aiming for Michelin Clio Cup Series title glory after confirming his return to the Race Series with Westbourne Motorsport at the Autosport Show yesterday [10th January].

In addition, a new title sponsor for Pearson’s 2.0-litre, third-generation RS Clio 200 is set to be unveiled before the season opener at Silverstone – the ‘Home of British Motorsport’ – in late March.

A winter testing programme is in the pipeline as the 17-year old aims to carry the experience gained with series stalwarts Westbourne in 2018 forward and put in a fully-fledged title assault this time around.

The seven-event calendar once again takes in some of the UK’s most challenging venues and also includes a first overseas trip to Zandvoort in the Summer, before concluding at Oulton Park in October.

“We’ve known for a long time what we would be doing this season, considering how much we’ve invested into it and it’s also the best place for me at the moment in terms of my development and also continuing the relationship with Westbourne Motorsport,” commented Pearson.

“The championship has got a lot of interest surrounding it at the moment and it’s exciting times for everyone involved. I’m looking forward to it!”

“We are delighted to have Ronan returning for 2019 with Westbourne Motorsport,” added Joint Team Principal James Colburn.

“His pace was evident from his debut last season, not least taking pole position at the second meeting of the year at Rockingham.

“Ronan will certainly be a championship contender this year – no question.”
< Back to News