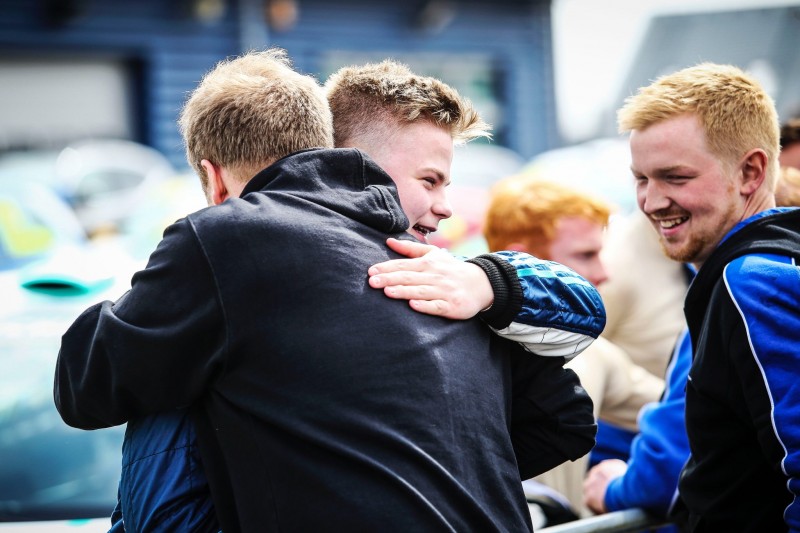 It was Ronan Pearson who snatched pole position in the Michelin Clio Cup Series at Brands Hatch in tricky conditions.


Pearson (Westbourne Motorsport) put in a last minute flying lap of 59.765s in the wet to pip current championship leader Ben Palmer (BPR) to pole by 0.003 seconds. The two drivers were the only ones in the field to dip their lap times below the one minute mark around the Indy formation of the circuit.


Tyler Lidsey (MRM) managed to secure the third fastest time of the day with a 1.00.030s, Despite sustaining bumper damage out on track, his previous lap time was quick enough to enable him a second row start for tomorrow’s action.


John Hamilton’s times lit up green towards the midway point of qualifying. The Jade Developments driver ensured that he would start on the second row of the grid by setting a time of 1.00.154s. He will be looking to secure some more silverware after a strong start to his 2018 campaign.


Completing the top five is Simon Freeman (Pitbull Racing) who set a time of 1.00.679s in the slow rain.


Finlay Robinson (Westbourne) narrowly missed out on fifth, just 0.012s behind Freeman meaning he starts sixth for Sunday’s action. He’ll be wanting to move up the order as he searches for his first podium of the season.


Finishing the Race Series qualifying lineup were Tony Verhulst (Westbourne) and Steve Williams (Jade) who all lapped consistent times around the Kent circuit.


Although Ben Colburn (Westbourne) starts seventh, an unfortunate incident meant that he wasn’t able to continue in the session. The driver had been third fastest in the first half of the session and was going ever quicker.


In the Road Series it was Nic Harrison (Jade) who hung on in the drizzle to take his third pole position of the season, making it three out of three for the Burton-on-Trent based driver.


It was an exciting battle between the rest of the drivers in the Road Series as they battled to set their fastest time.


Guest driver James Colburn (Westbourne) was the quickest of the rest and will start second tomorrow, however any points scored will not be counted in the championship standings.


James Joannou (MRM) set some rapid times in the closing stages of qualifying to enable him to line up behind the top two. Beside him will be Sean Thomas (Westbourne), who will be looking to make up lost ground in the championship after unfortunate mechanical issues at Silverstone.


Established as an independent series in 2014, the Michelin Clio Cup Series provides a home to the 2.0 litre, third-generation Clio Cup car used in the flagship Renault UK Clio Cup in support of the British Touring Car Championship until 2013.


Ronan Pearson said, “The conditions out there were really treacherous.I’m aiming for my first win tomorrow. I just need to get a good start and then settle in to the race and hopefully there’ll be a good result.


The car today felt fantastic and I can’t thank my sponsors and team enough for all of their hard work.”

Ben Palmer said, “It was another good qualifying session which sets me up for tomorrow. I was so close to getting pole, but I’ll make sure I do everything to get those wins tomorrow.


The car felt good and the team have done a great job, but the weather made things tricky out there.”

Nic Harrison said, “Getting another pole is fantastic. The conditions were tough so you have to put even more in. It paid off and I’m looking forward to going racing tomorrow.


The team have given me a great machine and now it’s down to me to get some more wins.”