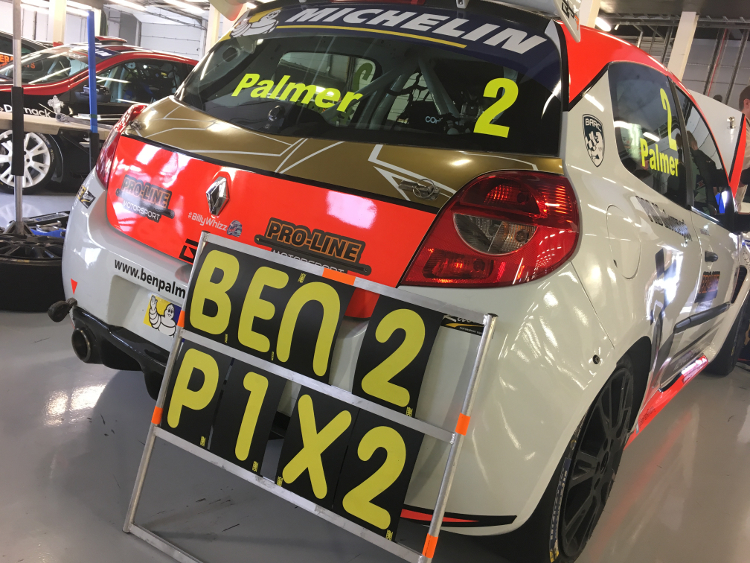 Ben Palmer and Nic Harrison secured a double pole position apiece in the Race Series and Road Series respectively during the final qualifying session of the 2017 Michelin Clio Cup Series season at Silverstone today (07 October).
Palmer (Maidenhead) was the only driver in the field to break the 1m 16s barrier as he set the pace around the 1.85 mile International circuit, taking his fourth and fifth pole positions of the campaign as he heads into race one knowing just a top six points finish will secure him the title.
His chances of success were increased with his main championship rival Anton Spires (Buckingham) suffering an unfortunate throttle issue during the twenty minute session, leaving him an uncharacteristic sixth and eighth on the grid for the two races tomorrow.
Palmer will line-up on the front row alongside guest driver James Colburn (Worthing), with the Renault UK Clio Cup front-runner finishing up 0.284s shy on the timesheets on his first outing in the championship since a double win at Anglesey last season.
Hot on his heels was his younger brother Ben Colburn (Worthing), who crucially starts ahead of Simon Freeman (Pulloxhill) and Tyler Lidsey (Dartford) in both races as the trio hotly contest third position in the Race Series points standings.
Series newcomer John Hamilton (Enfield) qualified a strong seventh and sixth overall meanwhile after receiving support from newly-crowned BTCC champion Ashley Sutton, while fellow debutant George Young (Pershore) will line up ninth for both races.
Ben Palmer: “I’m delighted to start off the weekend this way and it puts us in the best position for the races. It’s not going to be easy, but I’m just going to think everything through, focus on getting the points I need in race one and then go enjoy myself in race two.”
Anton Spires: “It’s hugely frustrating. The car felt quick in testing yesterday, but it hasn’t gone our way today and bad luck has hit us again this season. We’re going to go out tomorrow, enjoy the races and try to fight through to the podium.”
In the Road Series, Harrison (Burton-On-Trent) set the pace by two tenths of a second for his eleventh and twelfth poles of the campaign, which means he has beaten the championship record of ten Road Series pole positions in a season, which he himself set last season.
Harrison’s chief title rival and Jade Developments team-mate Shanel Drewe (Bristol) has kept her championship chances open with third in class on the grid for both races, as Sean Thomas (Ross Shire) and Finlay Robinson (Harrogate) shared the front-row starts.
Full qualifying results can be found here: http://tsl-timing.com/file/?f=BARC/2017/174021cls.pdf
< Back to News