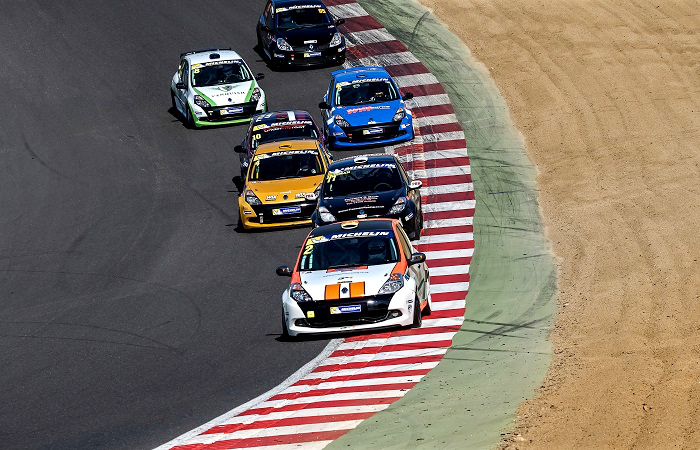 Ben Palmer will contest the final round of the Renault UK Clio Cup after cementing his advantage in the Michelin Clio Cup Series standings after a decisive meeting at Brands Hatch last weekend [September 23/24].

The MRM-supported racer split the spoils with title rival Anton Spires around the 1.99 mile Indy circuit, but crucially his advantage accrued in previous rounds ensures he will take to the same circuit in less than seven days in front of a packed crowd and thousands more live on ITV4 as part of the British Touring Car Championship support package, a prize worth over £8,000 and provided by Westbourne Motorsport.

Spires laid down the gauntlet on Saturday with an impressive double pole-position, though his advantage in the first race on the opening lap as both Palmer and Pitbull Racing's Simon Freeman seized first and second respectively.

Spires would recover the runner-up spot from Freeman the following lap, but ultimately proved unable to find a way back past Palmer, who took the chequered flag by less than three tenths of a second.

The positions were reversed in the second encounter, however, as Spires managed the gap to Palmer to keep his championship hopes alive heading to the season finale at Silverstone.

MRM's Tyler Lidsey and Simon Freeman continued their dice for third overall in the Race Series standings, locking-out the third and fourth spots on the road for the entire weekend. Lidsey eventually overcame Freeman to take his second podium in successive meetings in race one, but was kept at arms length later in the day.

Ben Colburn (Westbourne) continued his consistent form from recent meetings with a brace of fifth place finishes, both times ahead of the returning Jon Billingsley (Vanquish Motorsport).

A victory for CCGHImports.com driver Nic Harrison keeps the Road Series title fight alive until the final meeting next month, though he was forced to share the limelight with Sean Thomas, now a four-time race winner in his maiden season within the series.

A podium for Shanel Drewe (Jade Developments) in the second race ensures she also goes to Silverstone with a chance of winning the class title – and a fully-funded test day in a 2.0 litre, third generation Clio Cup car.

Finlay Robinson banished misfortune from Anglesey with the final spot on the rostrum in the opening round, with continued progress for Tom Oatley and James Joannou as they look to end their debut seasons in national club motorsport on a high.

Darren Geeraerts marked his debut weekend in the championship with a brace of top-six class finishes as he looks to emulate their podium achievements on the International loop at the 'Home of British Motorsport' in a fortnight.

Until then, however, the battle for honours in both classes remains finely-poised heading to the decisive double-header.

Ben Palmer: "I'm delighted to have the opportunity to race in the Renault UK Clio Cup, particularly as it's the next step up for me.The weekend went really well - my start in the first race was perfect and that helped me establish a gap and set the fastest lap of the race. I struggled at Graham Hill Bend in the second race and that allowed Anton to gap me, but we set the fastest lap again. I've just got to be sensible at Silverstone as the championship is getting closer, but first I'm going to enjoy every moment this weekend at Brands Hatch."

Anton Spires: "Overall I was happy with my performance at the weekend. Thanks to Westbourne Motorsport for a strong car - it was on rails all weekend and helped me secure both pole positions. It didn't help me this weekend that the grid was side-by-side and not staggered as it should be. I tried to force Ben into a mistake during the first race but credit to him, he defended well and I couldn't make a clean move to pass him. I made a better start in the second race and controlled it from there. I'm slightly disappointed as I could have won both races, but nevertheless I'm looking forward to racing at Silverstone, my home circuit, in a fortnight."

Nic Harrison: "Overall it was a good weekend with clean, sold racing. The weekend started well with two pole positions, I matched Sean for pace in the first race but there wasn't really a clean opportunity to pass - nevertheless second was a positive start. I managed to take lead at the second corner in the final race, Sean applied the pressure all race but we had enough in hand to take another victory."

Image from Rod Tietjen.
< Back to News