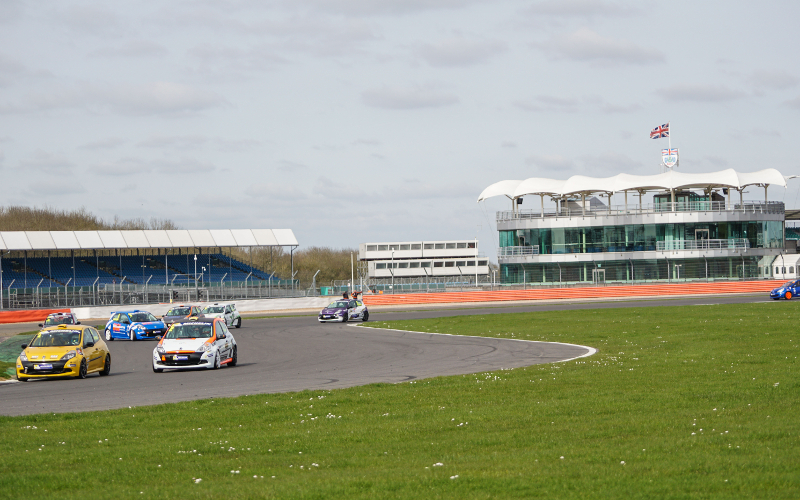 Silverstone will host the biggest Michelin Clio Cup Series grid in two years this weekend (07/08 October) when a seventeen car entry tackles two races around the International circuit during the 2017 season finale.
The grid has been bolstered by the addition of championship debutant John Hamilton. The Enfield-based racer will enter the Race Series, teaming up with Road Series title protagonists Nic Harrison and Shanel Drewe in the Jade Developments camp.
That means there will be ten drivers competing in the Race Series this weekend alongside seven in the Road Series, the biggest grid of the 2017 campaign matching the previous highest tally that contested the 2015 season finale at Silverstone.
That entry sees new faces and returning stars joining the established class of 2017, with two titles to be decided this weekend as Harrison and Drewe battle it out for the Road Series title, and Ben Palmer and Anton Spires duel for the Race Series crown.
With those two championship battles to watch, as well as the rest of the grid looking to end their years on a high, this weekend’s action is sure to be must watch as the final chapter of a thrilling season of racing plays out.
While advance ticket sales have ended, tickets can be purchased on the gate at Silverstone priced at £12 for an adult per day, whilst child aged fifteen and under get in for free.
Updated Weekend Timetable:
Saturday 7th October:
Qualifying: 13:40 – 20 minutes
Sunday 8th October:
Race One: 11:45 – 14 laps
Race Two: 15:50 – 15 laps
Event results and live timing will be available across the weekend courtesy of TSL Timing, which can be viewed by clicking here, while you can keep abreast of all the action by following us on Twitter, @ClioCupSeries, and by liking our Facebook page.

Image from Phil Laughton Photography
< Back to News