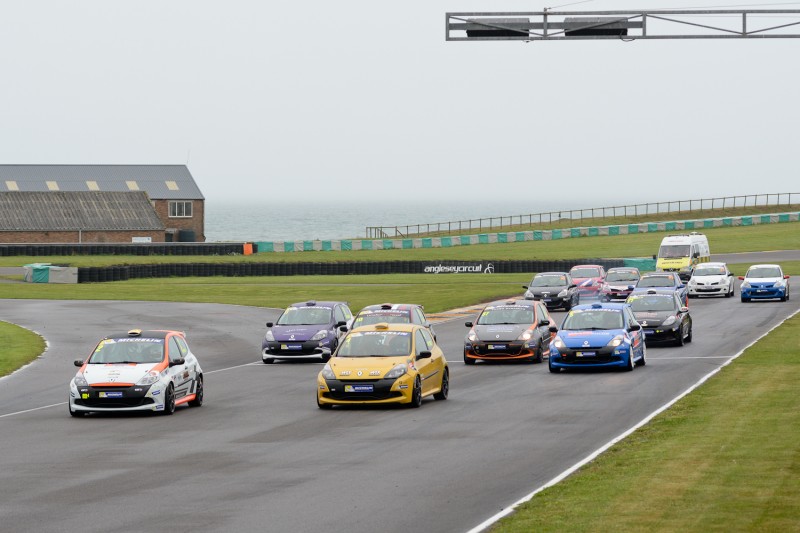 Ben Palmer bounced back from misfortune in the opening race to record a brace of victories in the Michelin Clio Cup Series on the championship's annual visit to Anglesey and further extend his points lead in the Race Series.

With the championship prize of a guest entry in the season finale of the Renault UK Clio Cup courtesy of Westbourne Motorsport set to be awarded to the points leader following the next event at Brands Hatch, the race for honours looked set to reach new heights before the triple-header got underway.

Palmer, who arrived in North Wales 20 points ahead of title rival Anton Spires, was adjudged to have made a false start from pole position by officials during the opening contest on Saturday afternoon and was handed a 10 second penalty.

That allowed Spires to take the de-facto lead from MRM's Tyler Lidsey with a bold move to the inside of Church corner. Palmer would eventually finish third after a strong turn of pace clawed back the majority of his time penalty.

Palmer then continued his strong vein of form into the opening race on Sunday, scoring a seventh race victory of the season in devastating fashion amid wet conditions after soaking up the pressure of a safety car restart and the ever-present Spires behind to take the spoils.

His second victory of the weekend would come in much more comfortable fashion, easing his third-generation, 2.0 litre Clio Cup machine to a near 20-second advantage at the chequered flag.

The story of the race undoubtedly proved to be Melksham's Nick White who, after missing the recent round at Donington Park, returned in fine fashion and netted a career-best second in the Race Series after passing Spires into Church.

The battle for third in the Race Series standings proved a highlight across the three contests, with the ultra-competitive quartet of Simon Freeman, Ben Colburn, Tyler Lidsey and Sarah Franklin proving to be near-inseparable on circuit.

Lidsey's second place finish in the opener gave him the initial advantage, but a frustrating middle race and a gamble on slick tyres in the damp final encounter allowed podium regular Freeman and Colburn, who finish each race in an impressively consistent fourth, to come through and tie level for the third spot in the points table leaving Anglesey.

Franklin remains one of the few Race Series drivers to have scored points in every round following her graduation from the Road Series ahead of this season, and three more solid finishes keeps her in the hunt heading to Brands Hatch.

Road Series title rivals and Jade Developments team-mates Nic Harrison and Shanel Drewe both claimed a victory apiece, but mechanical maladies in the second race for Harrison have set him back 13 points in the championship run in.

Harrison's victory in the opener was controlled and calmly delivered, as was Drewe's in the second after capitalising on the former's misfortune, though the story of the race was undoubtedly the stoic defence James Joannou put up for second place, and though Sean Thomas pipped him on the final lap it marked Joannou's second class podium in as many meetings in this, his first season of club-level national motorsport.

Donington, by contrast, proved a frustrating meeting for double Rockingham winner Thomas, but the Westbourne driver returned to form with victory in the final race, extending his advantage whilst Harrison and Drewe disputed second behind.

Tom Oatley continued his development with another three strong points finishes, and Finlay Robinson's podium in the opening race demonstrated his pace amid misfortune.

The net result of the triple-header in North Wales sees Palmer sit a provisional 24 points ahead of Spires, with Drewe 13 markers ahead in the Road Series standings.

Both championship battles are likely to take another twist in the tale when the Michelin Clio Cup Series returns to action at Brands Hatch in three weeks time [September 23/24].