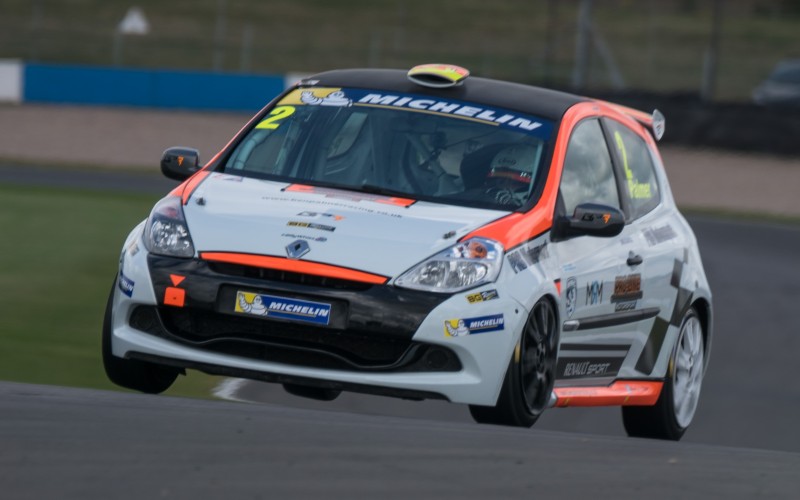 Just three rounds stand between either Ben Palmer and Anton Spires and the Michelin Clio Cup Series title, with the two arriving at Anglesey for this weekends triple-header separated by 20 points in the Race Series standings.

The pair have enjoyed a lockout of each race victory, pole position and fastest lap so far this season, though Spires ended his five-race winning streak with a hard-fought win last time out at Donington Park.

It proved to be a potentially season-defining weekend in the Midlands, with a broken driveshaft for pole sitter Spires in the opening race, allowing Palmer to come through for victory and establish some breathing space in the standings, however with dropped scores taken into account the Westbourne Motorsport driver is only 8 points adrift, and the two are likely to be a mainstay atop the timesheets this weekend.

The championship, which provides a cost-effective home to the third generation, 2.0 litre Clio Cup race car seen in support of the British Touring Car Championship until 2013, this year offers a guest entry in the Renault UK Clio Cup as it's prize, awarded to the points leader after the penultimate round at Brands Hatch later in September [23rd/24th].

Simon Freeman leads the chasing pack in the Race Series, and since his championship debut at Croft in April has proved something of a revelation, with the Pitbull Racing driver yet to finish outside the top four in a race.

The battle to seize third in the standings from Freeman could scarcely be closer, with former Junior Saloon Car Champion Ben Colburn in pole position to strike with a deficit of just a single point.

Misfortune at Silverstone and Croft have largely blighted the promising Tyler Lidsey's quest for honours this campaign, and he sits sixth in the standings behind experienced contender Sarah Franklin, a consistent points scorer following her graduation from the Road Series earlier this year.

Nick White rounds out the regular runners after missing both Croft and Donington Park, and will undoubtedly be a contender for the podium slots on his return this weekend.

Nic Harrison is the man to beat in the series' Road Class, which features race-converted Clio Renaultsport 197 and 200 models, though Shanel Drewe will look to build on her maiden class victory at Donington in July and close the 7-point advantage to her Jade Developments team-mate.

Tom Oatley has only been racing at this level for a month, but already the ultra-consistent Trowbridge-based racer has elevated himself to third in the class standings, including his first class podium at Donington.

James Joannou was another to claim that honour at the Leicestershire circuit, and he sits fifth behind double Rockingham winner Sean Thomas. Thomas' team-mate Finlay Robinson rounds out the regular runners in the category.

With events at Brands Hatch and Silverstone to follow in the next two months, this weekend is set to be another exciting chapter in the fight for both championship titles.