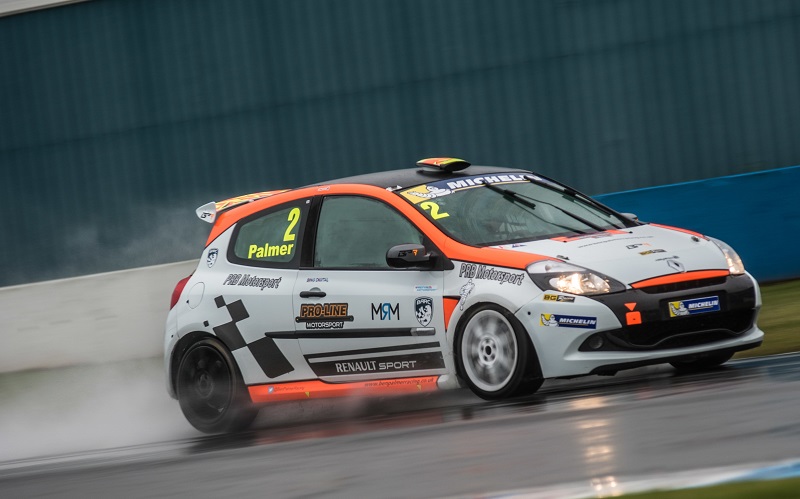 MISFORTUNE FOR SPIRES AS PALMER EXTENDS LEAD AT DONINGTON PARK

Ben Palmer extended his advantage in the Michelin Clio Cup Series standings to 19 points as both he and championship rival Anton Spires claimed a victory apiece at Donington Park last weekend [22-23 July].

The duo arrived at the 1.9 mile Leicestershire circuit divided by a mere 8 points and with an enviable record, having exclusively enjoyed every pole position, race victory and fastest lap at each of the three events to date between them.

The dynamic of their championship fight, however, would change during a torrentially wet first race. Spires' hard-fought pole position, secured by just 0.354 seconds, went to waste as a broken driveshaft forced him onto the sidelines before the cars had even made their way to Redgate for the first time.

Having inherited the Race Series lead, Palmer set about demonstrating his race-winning capabilities, managing the hazardous conditions to extend an advantage just shy of six seconds at the chequered flag over Simon Freeman, the Pitbull Racing continuing to impress in his rookie season with another accomplished drive that handed him third in the points overall. Ben Colburn claimed the final spot on the podium after calmly fending off pressure from Tyler Lidsey behind throughout.

That result extended Palmer's race-winning streak to five in a row, matching the previous record set by Mike Robinson back in 2014.

Contrasting conditions on Sunday set the scene for another hotly-contested duel at the front, with Anton Spires' seventh pole position of the season courtesy of his second fastest time in qualifying giving him the perfect opportunity to strike back in rapid fashion.

The Westbourne Motorsport driver made no mistake, pulling across to the inside line to cover off any threat from Palmer in the opening exchanges, before stretching his legs and keeping the MRM ace at arm's length. The gap closed towards the end of the contest, particularly whilst lapping backmarkers, but ultimately Spires held on by just under half a second to strike a quick blow to his rival's extended points lead.

Both have four rounds left to run until this years prize, a guest entry in the final round of the Renault UK Clio Cup that supports the British Touring Car Championship on the TOCA package – kindly supplied by Westbourne and worth £8,000, is awarded at Brands Hatch, the tension is rapidly approaching fever-pitch.

Freeman had looked likely to challenge the leading pair at the start of the race but was ultimately forced to settle for another podium in third ahead of Tyler Lidsey and Ben Colburn.

Sarah Franklin added another consistent weekend to her record as she continues to grow in stature following her graduation to the Race Series for 2017, taking another brace of points finishes in 5th and 6th across the two races.

In the Road Series, Shanel Drewe claimed her first class victory by nearly 20 seconds over experienced campaigner and championship rival Nic Harrison on Saturday, though Harrison emulated Spires in striking back the following day to maintain his narrow points advantage heading to Anglesey.

There were celebrations for Tom Oatley and James Joannou after both rookies claimed their maiden podium finishes in the Road Series, and the first of their club racing careers overall.

Sean Thomas suffered two retirements but remains third in the class standings after a difficult weekend, whilst consistent mechanical gremlins also plagued Finlay Robinson's efforts – both will be back with a vengeance as the championship heads into the final three meetings of the season, and the prize of a fully-funded test in a Race Series car is awarded.

The Michelin Clio Cup Series travels next to Anglesey Circuit over the weekend of 02-03 September.

Ben Palmer said, “Obviously the aim in each race is to grab as many points as we can. I've come home first and second, I've scored the most points, so I'm happy with that, we'll just keep putting points on the table and wait until the end of the year.

“We need to try and make a few more improvements to the car, I struggled getting off the corners which meant I couldn't get close enough to Anton at the following corner but we'll try and work on it, and hopefully it'll be better at Anglesey.”

Anton Spires said, “I think that victory was the least I could do for the team, really, they've been flat out all weekend preparing five cars so I wanted to reward them with that.

I'm glad to get a win – it's been a long time and the guys have put together a great car. It's gutting what happened in the first race but I think it showed where we could have been yesterday – I'm just pleased to get a win under my belt and break Ben's record and we can carry this forward to Anglesey now.”

Shanel Drewe said, “Overall, I'm very pleased. My first ever win in my first ever drive in the wet so it's been an absolutely amazing weekend.

To go out for the first time ever in the wet, on my eighth ever race weekend, and win was phenomenal. I think there's only one or two points between me and Nic now, it is extremely close.

Anglesey is a really good circuit, I've been there once in a GT5 last year thanks to my sponsor Dansoft Aviation Services. I love the circuit, I've never driven a front-wheel drive around there and I've only done it in scorching heat, so I'm going to do my rain dance for Anglesey!”

Nic Harrison said, “The weekend could have been better, obviously, but it's ended well and I'm happy with the win in that second race. The car is okay at the minute – we always have problems but none today so I'm pleased.

“I always have a lot of bad luck with my car, but when it's going it is very, very fast, so that's the trick. Hopefully I've had all the bad luck I'm going to have but you never know – it's a car, at the end of rhe day.

“I've only ever been to Anglesey once but I like it there. It's a bit like Donington, really, there's a bit of everything and I quite like it, so I'm looking forward to it.”