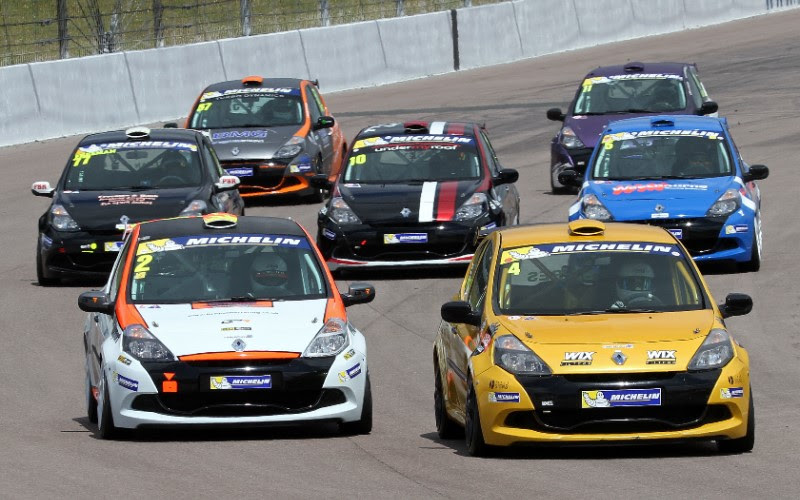 The duo are currently separated by a mere 8 points after sharing the honours at the season opener at Silverstone, before Palmer's recent run of four successive victories at Croft and Rockingham have swung the pendulum in his favour.

Spires' pace has been obvious, cemented by his four second-places complete with an additional point for fastest lap on every occasion, and the former UK Clio Cupentrant will be pushing hard to close the gap at the Leicestershire circuit in his third generation, 2.0 litre Clio Cup car.

Both will be mindful of the prize at stake, with the points leader of the Race Seriesafter the penultimate round at Brands Hatch in September awarded a guest drive in the final round of the Renault UK Clio Cup, which supports the British Touring Car Championship, at the same venue a week later in front of an expected capacity crowd.

The battle to secure third in the Race Series standings is equally intense, with experienced campaigners Ben Colburn and Sarah Franklin currently tied level, some 39 points adrift of the title fight.

They will face stern opposition from Simon Freeman, who scored a brace of podiums in Corby last time out, and Tyler Lidsey, though Nick White will miss the two races this weekend.

In the Road Series, which boasts race-converted Clio 197/200 models to provide a cost-effective route into tin-top racing, Nic Harrison currently holds a 6-point advantage over Shanel Drewe, but events at Rockingham have spiced up the class fight.

Debutante Sean Thomas contested his first weekend in the series in style, claiming both class wins. A repeat performance this weekend is likely to move him directly into the championship fight, with a fully-funded test day in a Race Series car on the line.

James Joannou has proved to be an equally fast learner and was unlucky not to take a class podium last time out, whilst Tom Oatley and Finlay Robinson will also look to further their development after joining the championship at the last meeting.

Each weekend thus far has thrown up unpredictability, action-packed racing and intrigue, and this weekend is set to be no different as the Michelin Clio Cup Seriesheads ever closer to the business end of the season.