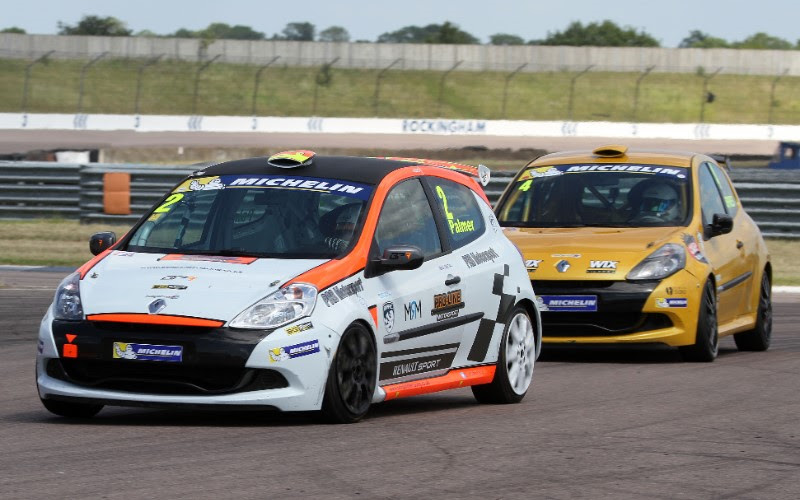 Ben Palmer has made it four Michelin Clio Cup Series wins in a row with a superb pair of Race Series victories at Rockingham this past weekend (01/02 July), while championship debutant Sean Thomas enjoyed a double success of his own in the Road Series.

Following a lengthy nine week break since the last outing at Croft, the biggest entry of the season so far would return to action in style with a pair of thrilling races around Rockingham’s fast and technical International Super Sportscar circuit during the third meeting of the campaign.

The field would get to grips with the circuit for the first time in overcast conditions during Saturday morning’s practice session, with Spires laying down a marker for the action ahead as he set the pace by over eight tenths of a second in his Westbourne Motorsport Clio.

With the sun breaking out over Corby ahead of qualifying, an increase in temperature presented a new challenge to the field, but it would be the same name atop the timesheets as Spires swept to a double position to make it five poles out of six so far this year.

It was tight at the top however as a late burst from MRM’s Palmer saw him finish less than a tenth of a second adrift of his title rival, whilst in the Road Series Nic Harrison also notched a double pole ahead of Shanel Drewe and series debutants Finlay Robinson and Thomas.

The two races would follow on Sunday, with a sensational start to the opener seeing Spires and Palmer running side-by-side through the opening few corners; the latter emerging in front to lead the field into an early safety car period following a puncture for James Joannou.

A perfectly executed restart secured Palmer a lead of over a second, but Spires would fight back and set the fastest lap of the race as he closed right onto the leader’s rear bumper heading onto the final tour, however Palmer fended him off to secure a hard-fought win.

A fierce three-way battle played out behind for the final podium position, with a great move from Simon Freeman around the outside at the Tarzan hairpin earning him a maiden Michelin Clio Cup Series top three finish ahead of Ben Colburn and Tyler Lidsey, with Nick White finishing sixth.

An action-packed race in the Road Series would see the podium positions changing hands throughout, with Drewe holding the early advantage before a slick move at the restart from Thomas gave him the lead, which he held to the chequered flag for a superb debut win.

Poleman Nic Harrison had lost ground on the opening lap, but a strong comeback from the points leader would see him eventually take second in the closing stages, whilst Drewe completed the class podium in third with Robinson in hot pursuit.

The second race of the day saw Spires get the best launch off the line in his third-generation 2.0l Clio race car to lead the field around the turn one banking for the first time, with Palmer slotting into second and immediately beginning to put pressure on the leader.

There would be plenty of side-by-side action between the top two as the race progressed, with Spires maintaining the advantage until lap nine, when Palmer’s perseverance was rewarded as he got alongside coming out of Tarzan and make the move stick into the Brook chicane.

Palmer kept his adversary at bay until the chequered flag to record his fifth win of the campaign, with second position and a second fastest lap of the weekend for Spires meaning eight points now separate them at the top of the championship standings.

Freeman would once again join them on the podium after grabbing third position on the opening lap, before then impressively soaking up race-long pressure from Lidsey who was left to settle for fourth ahead of Colburn, White and Sarah Franklin.

It would once again prove to be a dramatic race in the Road Series, with Harrison on course to record the victory before brake problems for the Jade Developments racer opened the door for Thomas to come through and complete a superb double win with Westbourne Motorsport.

Drewe passed her team-mate Harrison late on for second position, a result that continues her impressive 100% podium record for the season so far, while Harrison would complete the rostrum ahead of Tom Oatley, who showed consistent improvement across his first ever car-racing meeting.

The halfway mark of the 2017 Michelin Clio Cup Series season will come at Donington Park later this month, with Rounds Seven and Eight over the weekend of July 29/30 sure to be pivotal as the class of 2017 continue to battle it out for supremacy and a share of the £8,000 prize fund up for grabs.

Ben Palmer (#2): “I’d never previously done well at Rockingham in my career, so this has been fantastic for us. The car has been faultless all weekend from the MRM team and that allowed me to get on the front row and have two good races.

“They were tough races, as once I got ahead Anton [Spires] was really quick and kept me under pressure. It stays close between us in the championship, so I’ve got to keep doing what I’m doing and get every point that I can.”

Anton Spires (#4): “The weekend started off really well, finishing fastest in practice and qualifying, but frustratingly the races didn’t go our way. I had older tyres in the first one, and then in race two a slight gearbox problem at the crucial moment cost me time and was enough to let him through.

“Me and Ben [Palmer] raced hard and fair in both races though and I got a good haul of points which is key. There’s a long way to go with nine races left and it’s great to know we’ve got the pace to be at the front and fighting for the wins.”

Sean Thomas (#95): “It’s been an absolutely brilliant weekend and I’m speechless to be honest about how I’ve managed to come through and win both races. This championship has a great environment, with close racing with great competitors and I’ve enjoyed every second.”

Full results from across the weekend can be found on the TSL Timing website here: http://tsl-timing.com/file/?f=BARC/2017/172621cls.pdf.

The image is from Holbon Photography, words by Simon Paice.