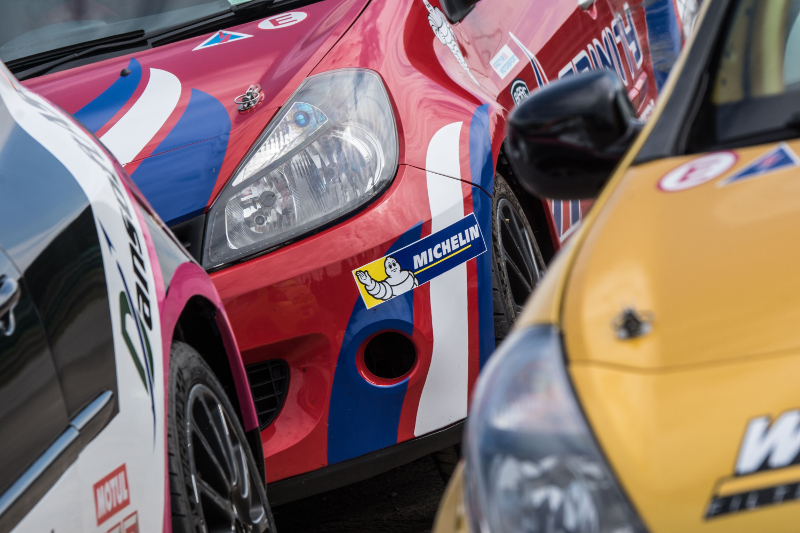 If the opening four races of the season have been anything to go by, the Michelin Clio Cup Series promises to produce two thrilling, action-packed encounters this weekend (1/2 July) as the championship returns to action at Rockingham Motor Speedway.

Ben Palmer (Maidenhead) leads the Race Series field into Corby having taken three of the opening four wins this season, with a share of the spoils with Anton Spires (Buckingham) during the Silverstone season opener in April being followed by a double victory last time out at Croft.

Almost nothing has split the top two so far this campaign, with the duo enjoying a clean sweep of the top two positions in each race to date, and they are separated by only four points at the top of the standings as they prepare to resume battle in their third-generation Clio Cup race cars.

While chapter three of their title battle is sure to be quite a spectacle this weekend, they definitely won’t have it all their own way with a number of drivers ready to break their dominance at the head of the field and taste the winners champagne.

Leading the charge will be Nick White (Melksham), Tyler Lidsey (Dartford) and Ben Colburn (Worthing), all of whom have featured on the podium so far this campaign – Lidsey taking a third place finish in each of the first two weekends, White and Colburn securing one apiece.

With all three of them having had some early season drama though, the ultra-consistent duo of Jon Billingsley (Maidstone) and Sarah Franklin (Kettering) currently sit above them in the top four of the championship standings, having secured best finishes to date of fourth and fifth respectively.

One to watch meanwhile will be Simon Freeman (Pulloxhill), who returns for his second outing in the championship following an impressive debut last time out at Croft, when he narrowly missed out on the podium positions as he secured a pair of fourth place finishes.

In the Road Series, championship stalwart Nic Harrison (Burton-On-Trent) currently holds the advantage having secured three consecutive victories, however it couldn’t be much closer at the top of the class standings with four points separating the top three.

The two in hot pursuit are the opening race-winner of the season Richard Colburn (Worthing) and Shanel Drewe (Bristol), who have both been permanent fixtures on the class podium so far this year as they keep the pressure on Harrison.

While Drewe will be targeting her first win since graduating from the JSCC and continuing her path on the most cost-effective tin-top route in UK motorsport, the ever-improving James Joannou (London) has a podium breakthrough in his sights.

There are three exciting new additions to the grid this weekend in the Road Series in the shape of car-racing rookie Tom Oatley (Trowbridge) and Junior Saloon Car Championship graduates Sean Thomas (Ross-shire) and Finlay Robinson (Harrogate).

With an end-of-season prize fund worth over £8,000 to fight for and the halfway point of the season fast approaching, the class of 2017 are sure to provide quite a spectacle this weekend as they give their all to taste success around the fast and technical 1.94 mile Rockingham circuit.

Event results and live timing will be available across the weekend courtesy of TSL Timing, which can be viewed by clicking here, while you can keep abreast of all the action by following us on Twitter, @ClioCupSeries, and by liking our Facebook page.

The image is from Phil Laughton Photography.
< Back to News