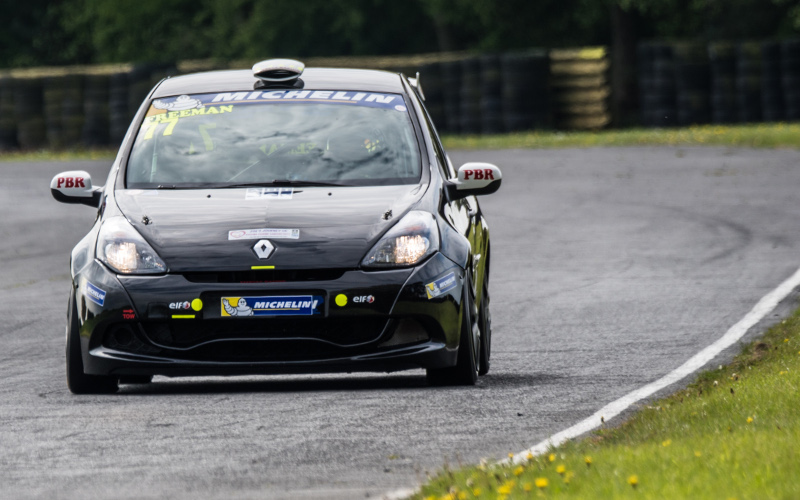 Simon Freeman (Pulloxhill) will return for the remainder of the Michelin Clio Cup Series Race Class season after a promising debut in the championship during Rounds 3 and 4 at Croft in April.


Freeman, who will run under his familiar Pitbull Racing banner with the backing of experienced championship stalwarts Westbourne Motorsport, scored a brace of fourth place finishes on his visit to the 2.1 mile Yorkshire circuit.
A mere eight tenths of a second adrift of Ben Palmer's pole position, the former Radical racer than cemented his potential by narrowly missing out on a podium finish in each of Sunday's two hotly-contested races.
Freeman will now join several others in pursuit of the Race Class prize, which this season is a fully-funded guest entry in the final round of the Renault UK Clio Cup that runs alongside the British Touring Car Championship, supplied by Westbourne and worth £8,000 to the driver leading the series after the penultimate round at Brands Hatch on September 23-24.
The category, which runs fifteen rounds across seven events at six of the UK's best circuits, including Brands Hatch, Silverstone and Donington Park, provides the most cost-effective route onto the TOCA package, with current champion James Dorlin already a race winner in his first season in the UK Clios.
Next, however, Freeman will tackle the 1.9 mile Rockingham Motor Speedway, near Corby, as he looks to further close the gap to his closest rivals – fellow newcomer Nick White and the experienced Tyler Lidsey.
Simon Freeman said: “I've been impressed with the level of competition across all of the cars and how close the racing is – not only that but it's fair as well, which is what it's all about.
“I think it's tough, trying to do the championship on your own. Obviously, with the knowledge at Westbourne Motorsport we're in good shape – they're a fantastic team and what they've done for me this weekend, on my first time here, is just fantastic, so I'm happy to be staying with their support.
“To get two fourth places on my debut at Croft was fantastic and I wouldn't have imagined we'd be that competitive straight away. We were only eight tenths away from pole position, and I'd never driven the circuit or car before, so we have to be pleased with that.
“I've had experience in sports prototypes and a few Radical rounds, which obviously is a little bit different to the Clio Cup Series. It's just a case of trying to get my head around a new car, and so far that bit is going well!”
Image from Phil Laughton Photography
< Back to News