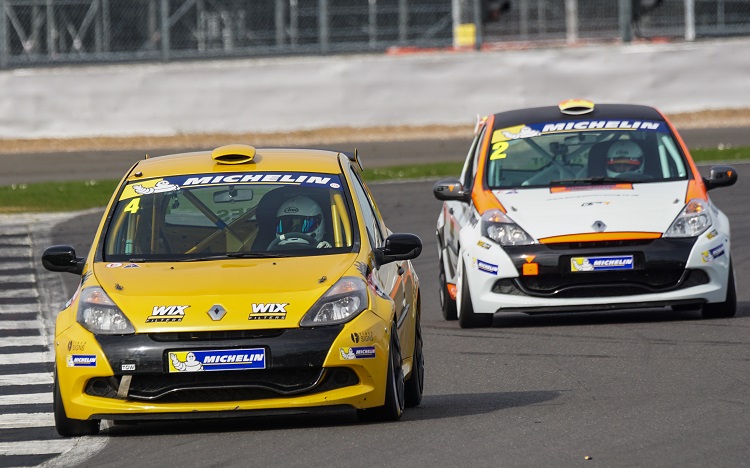 After an action-packed season opener at Silverstone last month, the Michelin Clio Cup Series heads next to Croft this weekend [28/29 April] for Rounds Three and Four of what is already shaping up to be a closely-fought title battle.

Ben Palmer (Maidenhead) and Anton Spires (Northampton) make the journey to the challenging 2.12 mile Yorkshire circuit level on points at the top of the Race Class standings, having taken a win and second place apiece at the Home of British Motorsport.

A total of eight different drivers graced the podium at Silverstone across the weekend, including Nick White (Melksham), who backed up his graduation to the Race Class with third place in the season opener that leaves him similarly placed in the championship standings.

Sarah Franklin (Kettering) was another to make a positive start to life in the ultra-competitive upper tier of the series following a number of years in the cost-effective Road Class, and sits fifth overall, two points adrift of the returning Jon Billingsley (Boughton Monchelsea).

Tyler Lidsey (Dartford) endured a challenging opening round having been tipped as a championship contender in the build-up to the new season. He backed up the pace of his MRM challenger with third in the final race after unfortunate contact with Ben Colburn (Worthing) gave both drivers an uphill struggle to rescue their respective weekends.

Simon Freeman (Pulloxhill) will make his championship debut in the Race Class this weekend after a late entry under the Pitbull Racing banner.

With a prize fund worth £8,000 being fronted by Westbourne Motorsport for the points leader of the Race Class after the penultimate round at Brands Hatch, including an outing in the Renault UK Clio Cup on the TOCA package, there is still everything left to race for.

Colburn's father, Richard, made his racing return after over two decades away from the driving seat, and underlined his pace with the overall lead and a victory in the cost-effective Road Class. He holds a three-point advantage over Shanel Drewe (Bristol) and experienced campaigner Nic Harrison (Burton on Trent).

With Chris Williams (Nutfield) absent this weekend on business commitments, James Joannou (London) will have the perfect opportunity to build upon steady progress at Silverstone to advance his own title push in this, his first season of competitive car racing.

The victor in this class can look forward to a fully-funded test day in the 2.0l, third generation Clio used in the Race Class, again courtesy of Westbourne Motorsport as part of the prize fund.

The Michelin Clio Cup Series will have two races across the weekend at Croft, with the first getting underway on Saturday [28th April] at 14:45 after qualifying at 11:05. Race two is on Sunday at 09:55.