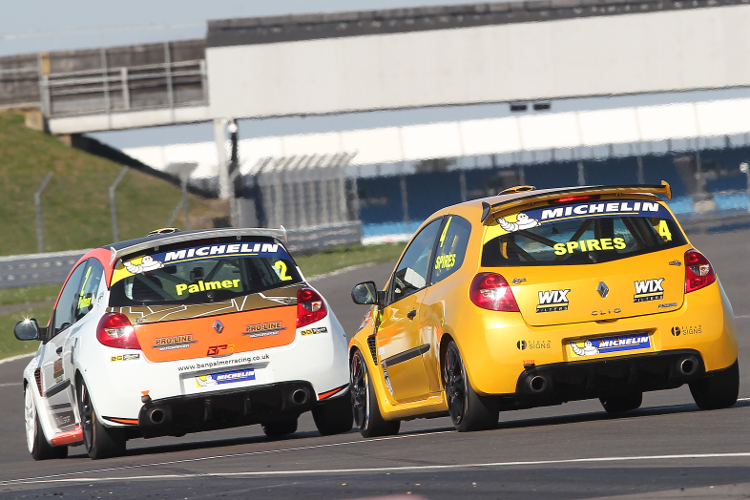 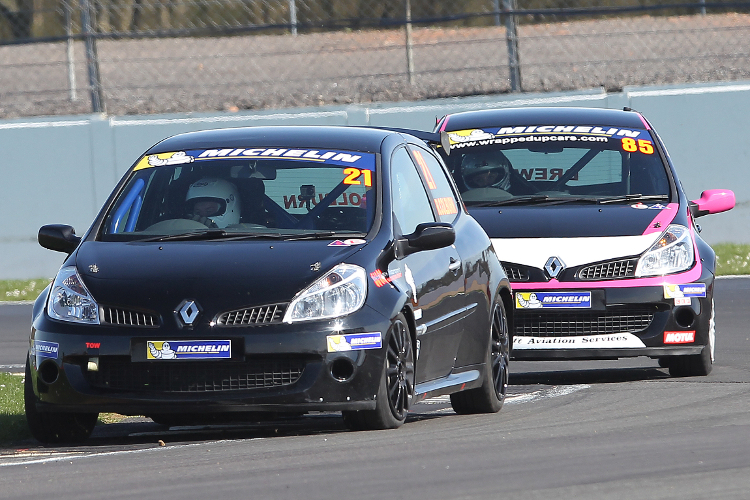 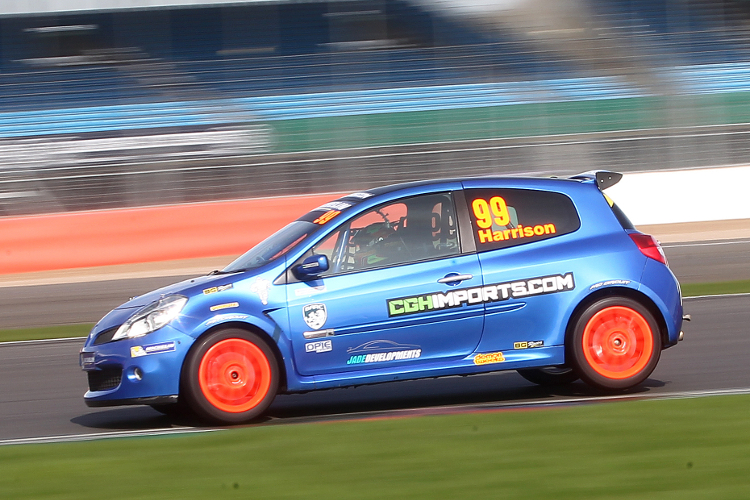 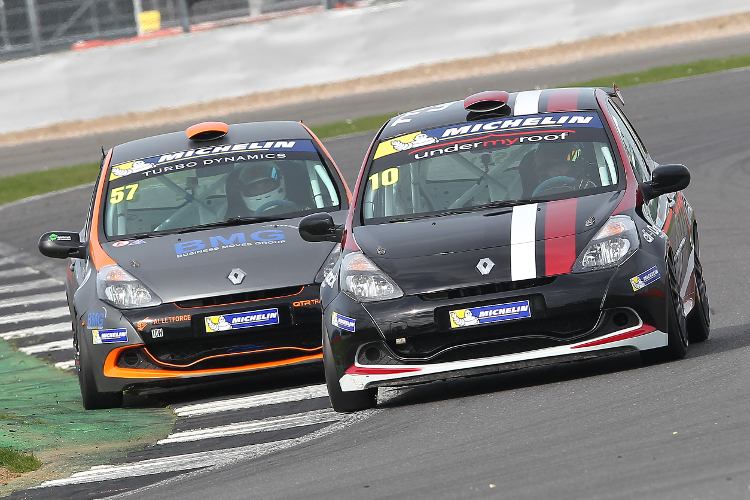 Ben Palmer and Anton Spires took a Race Series victory apiece during the opening rounds of the Michelin Clio Cup Series at Silverstone this weekend (25/26 March), while Richard Colburn and Nic Harrison shared the spoils in the Road Series.
An ultra-competitive start to the season saw no less than eight different drivers gracing the podium across two action-packed races at the ‘Home of British Motorsport’; setting the championship up for an unpredictable and enthralling 2017 campaign.
A diverse twelve car field headed to Silverstone for the season opener, with a twenty minute free practice on Saturday morning giving them a chance to get acquainted with the short, fast 1.64 mile National circuit ahead of the all-important qualifying session later that day.
After Spires and Harrison led the way in their respective classes in practice, it would be the same names atop the timesheets in qualifying – though their double pole positions would come in contrasting fashion under the glorious Silverstone sunshine.
Spires posted a blistering effort of 1m 06.202s to head the Race Series field by over six tenths of a second, though it was hotly contested between the chasing pack with the same time margin splitting the next four drivers; Palmer, Ben Colburn, Nick White and Tyler Lidsey.
It was tight at the top in the Road Series meanwhile, with Harrison edging out Westbourne team boss turned racer Richard Colburn by just nine hundredths of a second, whilst James Joannou and Shanel Drewe took a top three start apiece on their championship debuts.
In similarly vibrant weather conditions on Sunday, the season’s racing kicked off with an action-packed opening eighteen lap encounter – the highlight of which was a race-long duel for the Race Series victory between Spires and Palmer.
A great launch off the line in his third-generation 2.0l Clio race car gave Palmer the lead through the world-famous Copse corner for the first time, though Spires was immediately on his tail and the duo would go on to run nose-to-tail for the majority of the race.
Spires’ opportunity would come on the penultimate lap as he slotted down the inside at Becketts, but an instant fightback from Palmer saw him execute a perfect switchback move at Luffield to regain a lead he would maintain to the chequered flag for his maiden Clio Cup Series victory.
After an unfortunate incident ruled out Ben Colburn and Lidsey on the first lap, the battle for the final podium position would play out between White and Jon Billingsley, with the latter initially getting the spot at Brooklands on the opening tour.
A moment at the same corner later in the race however would lose the Vanquish Motorsport driver the position, with White coming through to take third place at the chequered flag on his Race Series debut ahead of Billingsley and Sarah Franklin.
In the Road Series, Harrison led from pole position in the early stages, however a moment under braking at Becketts on lap seven would allow Richard Colburn to seize control of the class, with him maintaining a lead of over three seconds for the remainder of the race in his Clio 197.
Trouble on the final lap would drop Harrison back to fifth in class at the finish, with Drewe picking up second place with reigning Road Series champions Jade Developments, whilst fellow series debutant Chris Williams completed the podium ahead of Joannou.
After missing out on victory in the opening encounter, Spires would make no mistake second time around as he maintained his advantage off the start, with Palmer left to settle for second as they headed around the first lap.
Despite Palmer’s best efforts to stick to the rear bumper of Spires’ Clio, the leader was able to post consecutive fastest laps as he pulled clear of his adversary, with the 2014 Road Series champion eventually taking the chequered flag over four seconds clear.
It was a much closer battle for third position meanwhile, with Lidsey and White running nose-to-tail throughout. White gave everything to try and complete a podium double for the weekend, but a defensive masterclass from Lidsey secured him a first overall podium finish in the championship.
Billingsley, Franklin and Ben Colburn completed the Race Series contingent, while in the Road Series, a dominant display from Harrison saw him lead from lights-to-flag to secure the eighth class victory of his Michelin Clio Cup Series career.
Second place for Richard Colburn ensured he left Silverstone as the early Road Series championship leader, while Drewe completed a brilliant double podium finish on her series debut ahead of Williams and Joannou, who battled fiercely throughout the race.
Following the action-packed series opener, the 2017 Michelin Clio Cup Series now heads into a five week break ahead of Rounds Three and Four of the season at Croft in North Yorkshire on April 29/30.
Ben Palmer (#2): “To kick off the season with the first race win is brilliant. I managed to get a good start and take the lead, but Anton [Spires] was slightly quicker than us and was right on our tail. We had a great battle and I’m delighted to have come out on top.

“We made some changes for the second race and I’m not sure if they were better, but Anton drove superbly and we weren’t going to catch him. Overall, this weekend has been fantastic, and now we’re heading to some tracks I raced on last year which should be positive for me.”
Anton Spires (#4): “Having not raced since August, I wanted a clean weekend to get some points and get back into my rhythm behind the wheel, which is what I did. It all fell into place on Saturday with the two pole positions, which set us up perfectly for Sunday.
“Race one didn’t go exactly to plan, but I was pleased with my comeback and I enjoyed the fight with Ben [Palmer]. Luckily it all went smoothly in race two, though it probably looked easier than it was. Massive credit to Westbourne, we’ve got the car in a real sweet spot ahead of Croft.”
Richard Colburn (#21): “The success this weekend has been totally unexpected. I drove the car for the first time on Friday and for someone like me, who’s relatively inexperienced in modern racing, it was instantly a great car to drive and it did everything I wanted it to.
“I was really surprised to see how close I was to Nic [Harrison] across the weekend. Finishing within a tenth of a second in qualifying gave me some hope, but to take the win in race one was a real shock. I’m delighted with how the weekend has gone and I’d love to do more rounds.”
Full race results from across the weekend can be found on the TSL Timing website here: http://tsl-timing.com/file/?f=BARC/2017/171221cls.pdf. The attached imagery is from Mick Walker, and more can be found on our Facebook page.
< Back to News