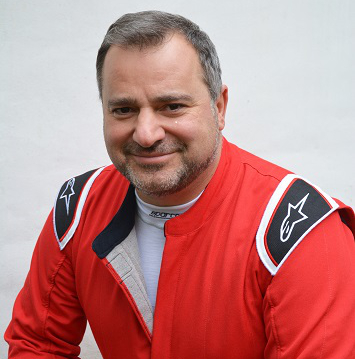 James Joannou (London) will embark on his maiden season of car racing in the Michelin Clio Cup Series after agreeing a deal to enter the cost-effective Road Series for the upcoming campaign.

The 48-year old, who has previous represented Great Britain at international level in Dragonboat Racing, will run with experienced front-running outfit MRM starting with the championship opener this coming weekend at Silverstone [25/26 March].

Joannou will contest his first full season of motorsport with the backing of Trinity Brokers Limited on the #7 car.

He has previously enjoyed success at PalmerSport track days, but will contest his first full round of organised motorsport alongside fellow Road Class debutants Chris Williams, Richard Colburn and Shanel Drewe.

This year the series will offer a fully-funded test session in a prepared third generation, 2.0-litre Clio Cup car to the champion of the Road Series.
James Joannou: “The plan is to win each race, naturally, but we'll see how that pans out. Realistically, I’ll be delighted to just finish the season having had a great time, a whole new experience and having made some new friends along the way.

“It’s something I would have liked to have started much earlier but never quite had the time or the money! I first got my racing licence in 2009 at Silverstone with a couple of friends but never put it to use back then. Now is the right time and I’ve raided the piggy bank but I'm more than happy to talk to any generous sponsors out there that would like their logo on a shiny new race car!

“The appeal to me of this series is that it’s a level playing field, not just about who has the biggest cheque book. As a not too crazily expensive way to get some race experience, it seemed the right choice as a first step - even if I am a bit of a late starter at this game - .and we’ll see where we go from here - assuming I survive this season, of course!

“I owned a Renault Clio 1.8RSi back in my twenties - which was a great car and lots of fun - so I’m probably trying to relive my ‘hot youth’ a bit!”
< Back to News