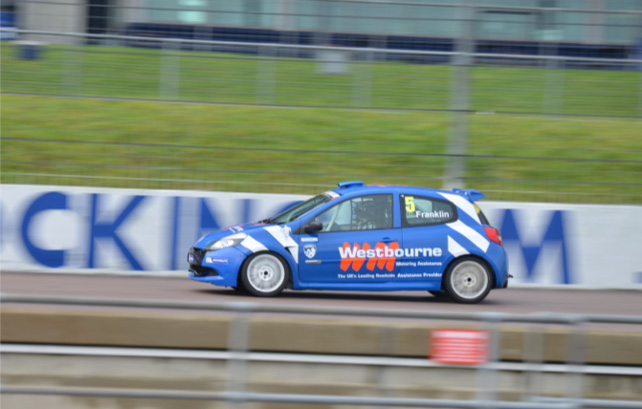 Franklin, an experienced competitor in the cost-effective Road class, has eight podium finishes, five pole positions, a brace of fastest laps and a race victory on her record prior to making the switch to the 2.0-litre, third-generation Clio racer used in the flagship Renault Clio Cup UK on the TOCA package between 2007 and 2013.

The Kettering-based racer has already completed three days of testing with her new machine across varied conditions, with her full livery set to be revealed in the coming days.

The championship, which runs across fifteen rounds at seven events at some of the UK's most prestigious circuits including Brands Hatch, Silverstone and Donington Park, will this year offer a prize worth £8,000 as the standings leader following the penultimate round is gifted a fully-funded appearance in the UK Clios with Westbourne Motorsport.

Franklin will also retain the services of driver coach Ed Pead for the forthcoming season as she aims to continue an upward development curve.

Sarah Franklin said, “I felt I had gone as far as I could with the Road class. My aim and goal in racing has always been to just get better and better every time I go out on track. I had pole positions, fastest laps, podiums and wins last year and was really unlucky with DNF's and loss of points due to issues with the car and then, of course, not getting to race at Anglesey and, after discussions with Ed Pead, my driver coach and Richard Colburn, the team boss of Westbourne, felt that it was the time to step up to the race class,

“It's a completely different animal! I've only done two days in the dry and one in the wet so I'm still very much getting used to the car and what it can do. Obviously, it's very different with slicks and the sequential gearbox and needing to get everything warm before going flat out! I've loving getting to know the car and learning what it can do,

“I love driving the Clio - be it the road and the race. I'd love to end up in the Renault Clio Cup so this is the natural ladder to do so. I'm with the best Clio team out there, Westbourne who have very much become my second family. Ed seems to be able to get the best out of me and I'm thoroughly enjoying seeing my driving getting better all the time,

“My entry to the championship was very much last minute so I've really not done anywhere close to enough testing to be right in the thick of it from the beginning, so my aim is just to improve each race weekend and use this year as a learning one with a view to having a 'proper' go at the championship next year.”