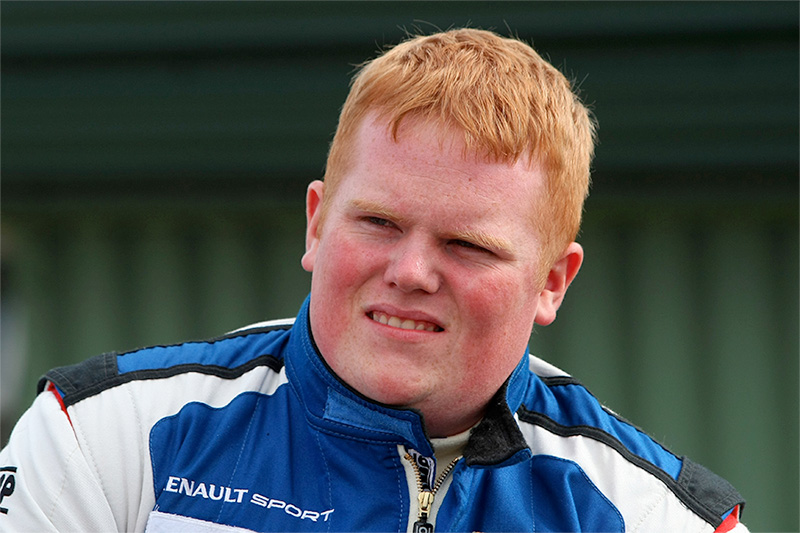 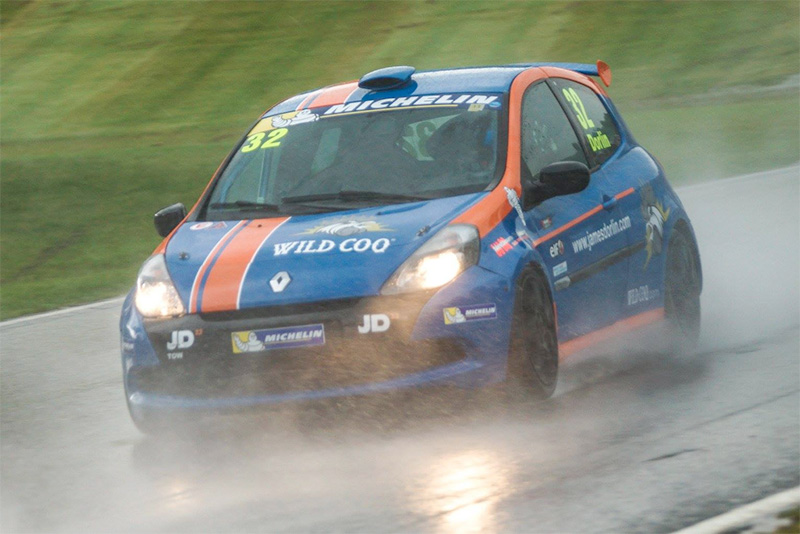 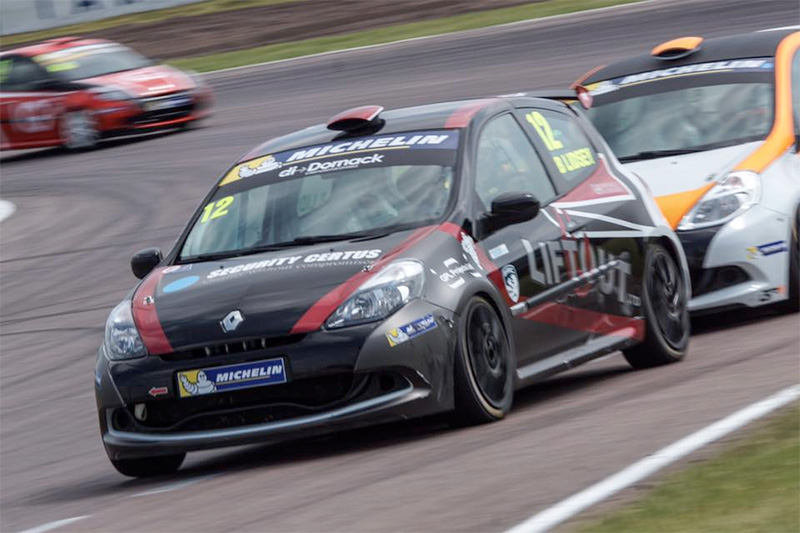 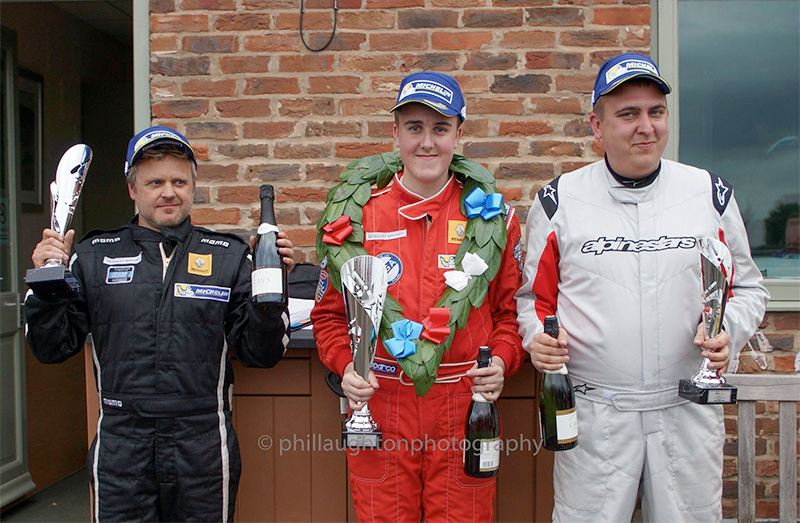 The battle for the 2016 Michelin Clio Cup Series title will go down to the final round at Silverstone in mid-October after two entertaining encounters at Anglesey saw James Dorlin and Brett Lidsey bag vital points in their individual quests for glory.

With the backdrop of the Irish Sea providing a picturesque sight for those in attendance, the returning James Colburn proved to be the man to beat as he took a dominant double of lights-to-flag victories.

As treacherous conditions battered the circuit for qualifying, the session turned into a truncated affair with two red flag periods halting proceedings. The first came when Ben Colburn lost control of his Westbourne Motorsport machine and subsequently rolled, thankfully exiting the car unhurt, whilst engine failure for Sarah Franklin brought the second stoppage.

Come the end of the session the experience of James Colburn, who is familiar with the Gen-3 Clio, reigned supreme as he bagged pole position for both races; narrowly ahead of the dicing duo of Lidsey and Dorlin. Nic Harrison proved to be the man to beat in the road class.

Replacing the heavy rain with dry conditions and even the occasional glimpse of sunshine, race one saw Colburn convert pole position into a lead that he never looked like losing. Building up an early gap of over a second, all eyes began to become transfixed on the battle for the remaining rostrum positions.

Failing to qualify due to an engine change, Luke Pinder was the early mover in the opening laps ultimately making his way up to second briefly before dropping to fifth at the flag. As Colburn made his escape at the front of the field the dicing quartet of Lidsey, Dorlin, Sam Randon and Pinder soon found themselves bumper-to-boot and scrapping.

Randon was the first to make a move as he dived down the inside of Pinder before then dropping him and making his way onto the rear of his Westbourne team mate Dorlin who had ben trying all race to bypass his rival. On the final lap however Dorlin cemented second place with a bold move down the inside of his title protagonist, extending his lead a that little bit more.

Tom Barley endured a frustrating race after a slow start in the greasy conditions saw him continuously close down the gap to the front runners but was forced to settle for seventh behind the charging Ben Palmer.

In the road series, Franklin's race day never materialised due an engine failure meaning jus three drivers competed. Points leader Harrison converted his pole position into a lead he ultimately never lost ahead of Jack Fabby and the ever-improving Damian Hirst who had run as high as second early on before being caught out by a damp part of the circuit.

As the sunshine continued to try make an appearance over the coastal venue, race two became an enthralling 12-lap encounter which became more about looking at the timing screens that the racing itself. Adjudged to have jumped the start, pole sitter Colburn and Randon were both handed 10-second time penalties.

Needing to build up an advantage at the front the Westbourne duo soon made their break from the chasing pack as Pinder once again led the hunt. With every championship point being vital, Lidsey made his move for the effective lead but couldn't find a way past Pinder and subsequently lost out to Dorlin briefly.

Heading through the infamous corkscrew section in the early stages Lidsey made contact with Dorlin sending the 17-year-old sideways however he managed to save it. Lidsey though wasn't finished as he continued his onslaught of attack on the championship leader, finally making his way through towards the end of the race as they made their way through the road class.

Barley and Palmer also sat waiting for the slightest mistake from the pair at the top of the standings and Ben Colburn wasn't too far away in his repaired machine with Tyler Lidsey hot on his heels too. Back at the front though Colburn and Randon had built up enough of a lead that they subsequently never lost position on time to complete an impressive weekend of racing.

The road class produced another enthralling race too with Fabby notching his third win in four races to pip Harrison who saw his charge scuppered by the race class category. Hirst remained in close proximety throughout the race but was unable to make any in-roads into the top two.

Heading to Silverstone now it is Dorlin that holds a 23-point advantage over Lidsey whilst the battle for third will be between Pinder and Randon with just a point in it between them. Harrison heads to the Northamptonshire venue leading Fabby by 13 markers.

James Colburn: "That was a great weekend - I always love to jump back behind the wheel of these Gen-3 cars; they're brilliant machines. I haven't had too much track time recently and I haven't raced at Anglesey for about eight years so when the opportunity to came about I couldn't turn it down. Conditions were pretty different across the weekend so to come away with two poles and two wins is brilliant. Apparently I umped the start in race two but I need to see the on-board to be sure, - I wasn't aware of it though so thankfully I had put the hammer down and built up a big lead."

James Dorlin: "One event down, one more to go now! Considering the team had to work hard to ensure the car was race ready following my off in practice I'm glad to come away having bagged some solid points. It was getting pretty close out there, especially in race two, so I had to use my head and not take any risks. We are in a good position heading to Silverstone now so I will take stock of everything and sit down to see what we need to do at the final round to win this championship."

Brett Lidsey: "I needed to take points away from James [Dorlin] and that is what I have done so I can be pleased with that. It was getting a bit like bumper cars at one stage but the car held together and we scored well once again. I'm chasing James so I will go to the final round with the same outlook I have had - to top every remaining session, if I do that then it will be out of my hands and down to what he can do."

Nic Harrison: "I was a little disappointed not to get two wins but Jack [Fabby] drove a great race. When he passed me I was starting to eat into his lead but sadly any chance I had at overtaking him was scuppered when the race class came by. It is between myself and Jack for the title and there is great respect between us so we will see what happens."

Jack Fabby: "I'm really happy to come away with another win, I really had to work for that one as I'm knackered now. It is really close out there and now Damian [Hirst] is breathing down our necks so it should be very competitive at the final event. The points are very close so I will just have to give it my all and what will be will be at the end of the year."

The final round of the 2016 Michelin Clio Cup Series will see the curtain fall on another enthralling season at the home of British motorsport, Silverstone, on the 8th & 9th October.