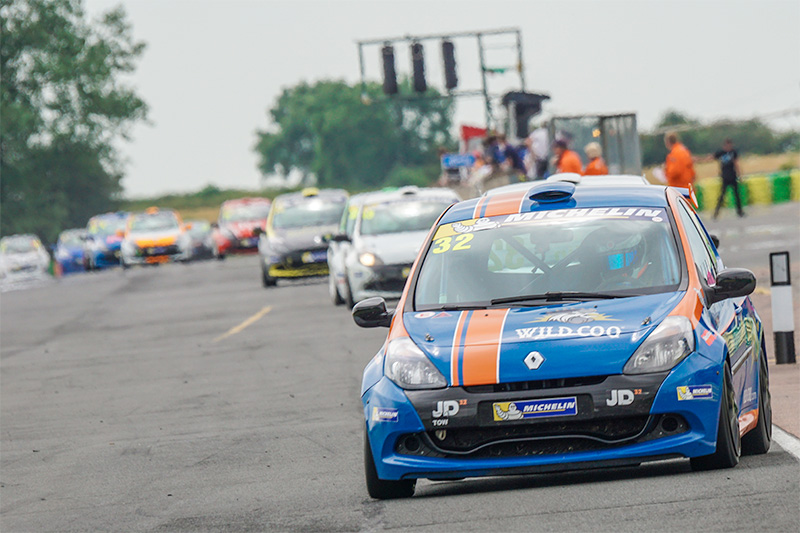 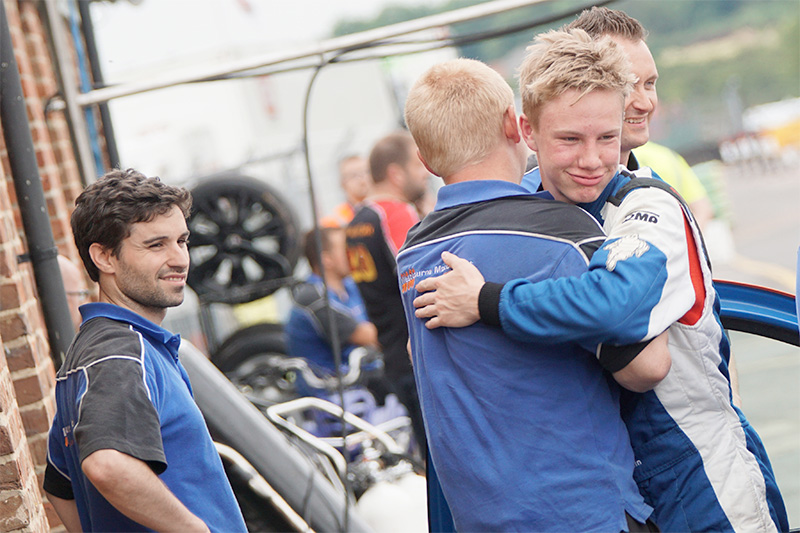 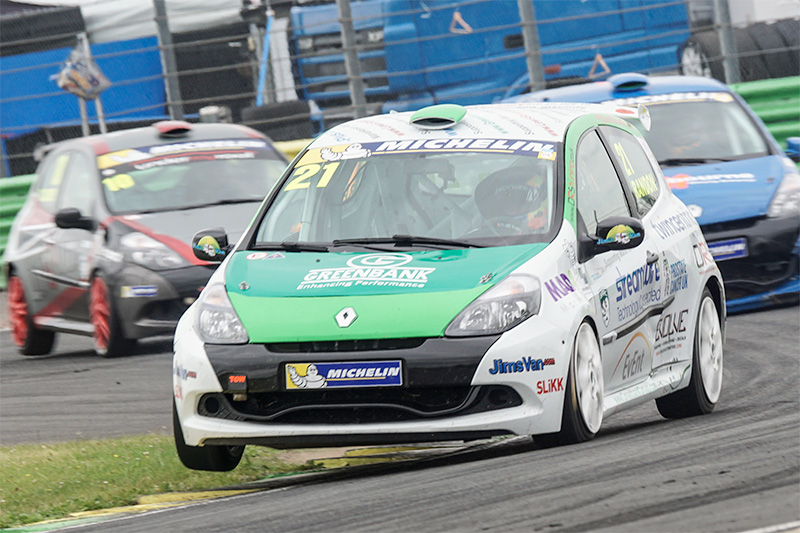 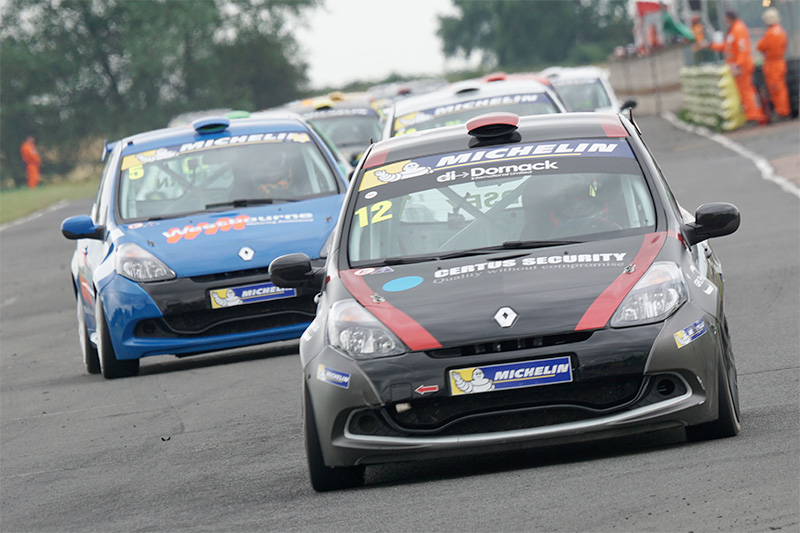 JAMES DORLIN BACK IN CONTROL OF TITLE BATTLE AFTER DOMINANT DOUBLE

The title pendulum swung once again this past weekend as James Dorlin produced a dominant performance to regain control of the point’s leads after masterfully notching a brace of wins at Croft.

As the conclusion of the championship approaches, a sense of determination and focus engulfed the pit lane ahead of rounds 10 and 11.

With a season’s-best grid of 15 cars and plenty of new faces in the championship including guests, BTCC driver Josh Cook and UK Clio Cup star Rory Collingbourne, the action was set to be as explosive as ever.

With the British weather set to misbehave, qualifying saw dry conditions engulf the circuit however potential rain showers sat in the air. Dorlin set the pace during the session with title protagonist Brett Lidsey benefiting from the slipstream of the Westbourne machine - ultimately leading to the pair taking a pole position each.

As the rainfall threat continued ahead of race one, the teams were keen to prepare both sets of tyres; especially after the poor weather conditions at Brands Hatch. As the drivers took to the track, the risk of bad weather intensified with darker cloud surrounding the Yorkshire grounds.

A good start for Dorlin saw him take the lead early into the first corner, with Lidsey hot on his heels. Unfortunately, Lidsey was to sustain damage as he began to close the gap to Dorlin; subsequently forcing him into the pits and to the rear of the field.

While it was a difficult afternoon for Lidsey, team mate Tom Barley settled into a lively fight with championship contenders, Sam Randon and Luke Pinder, to cross the line in third; his first podium finish in the championship.

Whilst the battles were hard fought up and down the field, especially with the likes of Collingbourne exiting from third with a component failure, Dorlin kept his head to win again whilst Cook clinched second – albeit 13 seconds behind the winner.

In the road series, Nic Harrison held the lead for the majority of the race but it was to be Jack Fabby who managed to overtake within the last few laps and seal a much-needed win. As they continued to battle, Damian Hirst overtook team mate Sarah Franklin as she dealt with technical problems to round off the podium.

In contrast to the conditions that had seen the drivers compete in the day before, race two left many keeping an eye on races running prior to the second encounter in a bid to get a handle on track conditions. Constant rain caused concern for many and also gave fans another blockbuster 20-minute race around the North Yorkshire venue.

Launching from pole position, Lidsey made a bid for top spot into turn one however it was to be Dorlin who once again took advantage and set the pace out front. As the top two began to stretch their legs, the battle for third began to intensify with Cook, Randon and Pinder all vying for the final spot on the podium.

Contact between Pinder and Cook at the hairpin saw the latter drop back before the fighting back himself to regain the spot two laps later. The 20Ten Racing driver then bridged a gap between himself and the chasing pack to clinch a double podium performance.

For Randon and Pinder however, their recent rivalry of the weekend’s earlier race intensified as contact between the two saw them both exit the circuit at Tower Bend. Whilst Pinder was able to re-join and finish towards the rear of the field, two-time winner Randon was left to rue what might have been as he retired with broken steering.

Back at the sharp end the battle between Lidsey and Dorlin continued with little more than half a second separating the pair throughout the race, however it would be Dorlin that prevailed.

In the road series, Harrison’s attempt to be defensive was no match for Fabby’s new found confidence as he overtook within the first few laps and replicated his win on Saturday. Once again Hirst was the man to pip Franklin to the final step on the rostrum.

Heading into the penultimate weekend of the 2016 campaign Dorlin now heads the Lidsey by 24 points with Pinder and Randon now slipping further away from the summit.

The Michelin Clio Cup Series continues with rounds 12 and 13 taking the championship to Anglesey Race Circuit on 3/4th September 2016.

James Dorlin: “It was a brilliant weekend for me coming away with exactly what I went to achieve, maximum points and back in the lead of the championship with a little bit of breathing space now after a tough weekend at Brands Hatch. With only two more meetings left in 2016 it's all about consistent strong point finishes and with the help of Westbourne Motorsport I believe we can do it!

Brett Lidsey: “Unfortunately the luck wasn't with us to start the weekend with contact at turn 2 then dropping off the curb at Sunny- it just wasn't to be. But the team MRM did a great job changing the wheel within the same lap and we brought it home P10 not the best but not a DNF. However, we made improvements into race two which saw us take back the competition. Sadly, I was unable to bridge the gap with Dorlin but there is still time to take back the championship lead.”

Jack Fabby: “I'm extremely pleased with the weekend at croft. I've always enjoyed going there so to come away with two wins is great and I can't ask for much more.”