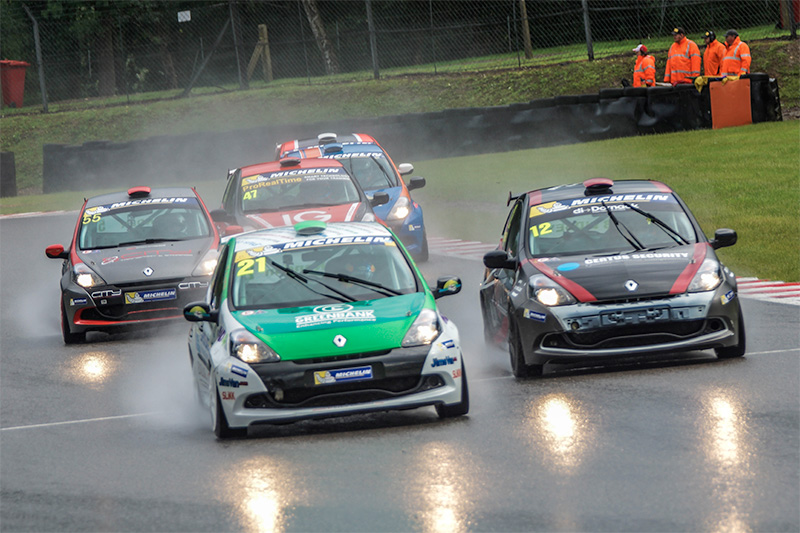 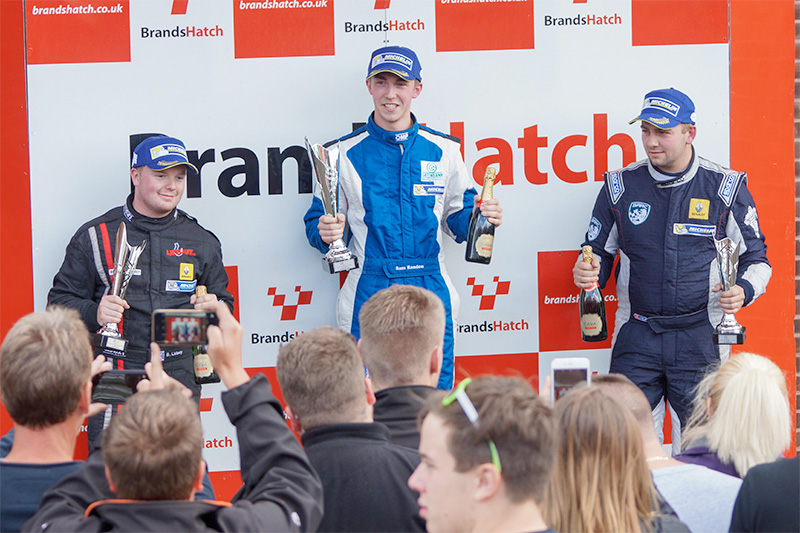 Brett Lidsey and Sam Randon proved to be the class of the field at Brands Hatch as different conditions proved to be an enthralling addition to the Michelin Clio Cup Series for rounds 8 and 9 this past weekend [25-26th June].

In what was a Saturday of contrasting conditions, qualifying saw bright sunshine bask the Kent venue as the battle for pole position took place. In what proved to be a highly competitive session, James Dorlin continued his fine form of late by topping the times to take pole for both races however Sam Randon provided little breathing space to join him on the front.

Light rainfall replaced the earlier sun as the grid lined up for the opening 20-minute encounter around the 1.2 mile Indy layout making conditions tricky to begin with. As the action got underway however the weather intensified and on lap six, race officials elected to halt proceeding's to allow the field to file into the pits and take on wet tyres.

Race one restarted but as soon as it had begun it was over again with the monsoon-like conditions proving to be undriveable. On the road it was Randon that had led the field until the latest red flag although that wasn't to be the final result with an 8-lap shootout being scheduled for the end of the day.

With the track still in a treacherous state, Lidsey underlined his wet weather skill-set at what is his home event to surge into a lead he was ultimately never challenger for as he crossed the line to take a second win of the season by more than three seconds. Luke Pinder was second once again whilst pole sitter Dorlin salvaged third; narrowly pipping the chasing pack of Randon and former BTCC racer Tom Barley.

Nic Harrison clinched his third consecutive victory in the road class ahead of Jack Fabby whilst Sarah Franklin took advantage of Damian Hirst's lap one retirement to round out the podium.

Despite the threat of rain looming before the start of race one, dry conditions greeted the drivers for race two and as it had been on Saturday, Randon got the jump on Dorlin to lead into Paddock Hill Bend and ultimately it turned out to be a lead he would never lose.

As the field filed down the hill into Graham Hill Bend, Lidsey hustled his machine around the outside of Ben Palmer and soon set off in pursuit of the top two. At the sharp end of the grid, Dorlin began to chip away into the early lead that had been built up by Randon but just as he began to launch his attack, mechanical woes struck.

Running bumper-to-boot onto lap seven, the Westbourne Motorsport driver saw his aspirations of remaining the championship leader disappear as he completely lost power and was forced to restart his car before rejoining and subsequently going on to finish ninth at the flag.

With Lidsey promoted to second, the chase for Randon began and he soon found himself pressurising the one-time 2016 race winner as the race headed into the latter stages. Filling the mirrors of the Westbourne driver, Lidsey produced a strong stint to close a three-second gap to less than two tenths and had a nibble at the back of his front-wheel-drive racer as they completed the final tour heading into Graham Hill. Unable to complete any move, Randon held on to take his second win of the season with Lidsey shadowing him.

Rounding out the podium was Palmer, his first of the season, who fended off the ever-present threat of Luke Pinder in fourth whilst Barley rounded out the top five despite making a strong start.

Nic Harrison made it four wins on the bounce in the road class as he took a comfortable lights-to-flag victory ahead of Jack Fabby and Damian Hirst who rounded off his debut weekend with silverware.

Virtue of his double podium performance, Brett Lidsey now heads to Croft next month leading the championship ahead of James Dorlin and Sam Randon.

The Michelin Clio Cup Series continues with rounds 10 & 11 taking the championship to Croft on the 23/24th July.

Brett Lidsey: "This weekend was so important for me because it is a local one and I had so many sponsors and friends coming out to show their support. To come away with a first and a second as well as leading the championship is a near perfect result. I've driven thousands of laps around Brands so I knew we were in good shape and the car felt mega all weekend. I'm fully focused on consistency at the moment and thankfully that consistency seems to be towards the front."

Sam Randon: "I felt like I needed to prove something in race two after losing the win on Saturday due to it being deemed a restart so there was a little inner pressure. I've had bad luck at Brands Hatch in the past so it was important to get a good result so to come away with a win is brilliant. I had good battles with both Brett [Lidsey] and James [Dorlin] and it was a shame to see James pull off as we were racing well. I'm wanting to stay in the title battle for as long as possible so this has helped my cause."

Nic Harrison: "I'm really happy with that result - to come away with another two wins is fantastic. We had a few more cars on the grid this weekend which was nice so hopefully the numbers can continue to grow for the coming events. To win four on the bounce is testament to the hard work that is being put in behind-the-scenes - long may this continue."