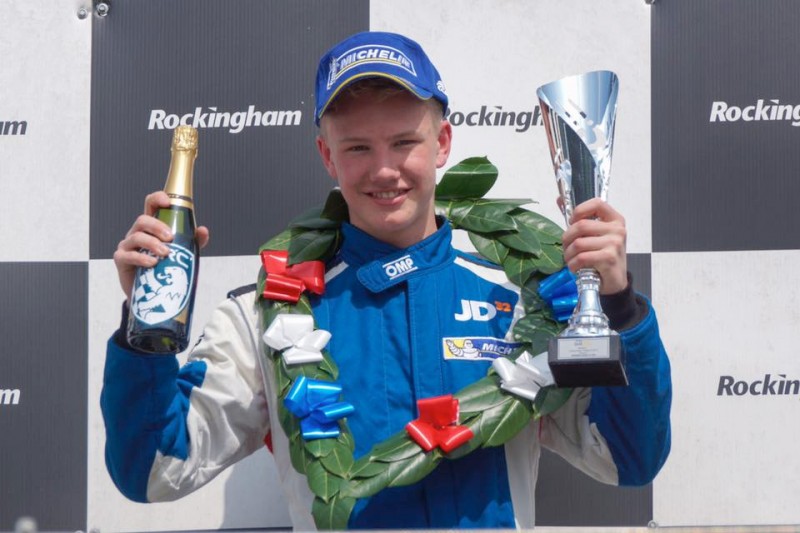 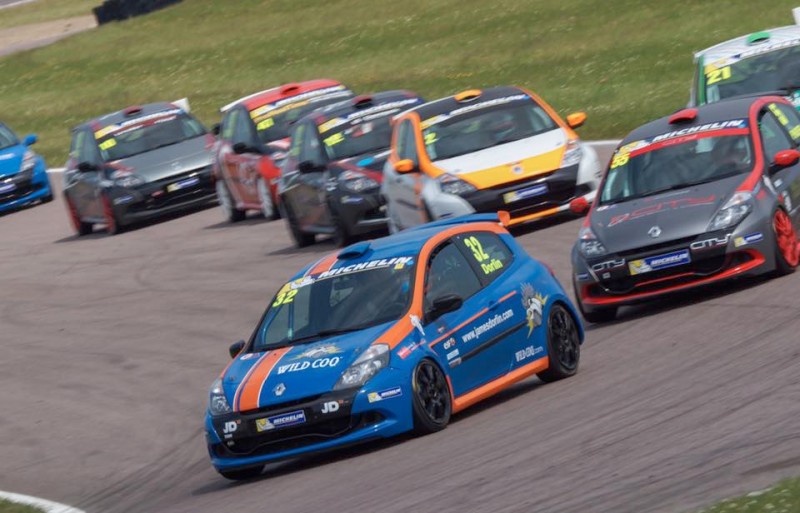 JAMES DORLIN FENDS OFF ALL CHALLENGERS TO DOUBLE UP AT ROCKINGHAM

James Dorlin romped to a brace of wins in the latest rounds of the Michelin Clio Cup Series at Rockinghm this weekend (28-29 May) to further extend his championship points lead.

Entering rounds six and seven heading the standings, the Westbourne Motorsport proved to be the man to beat in every session which subsequently culminated in a sizeable silverware haul.

Qualifying proved to be a highly competitive affair with Dorlin continuing his fine form of recent events by romping to a double pole position around the 1.94 mile circuit. Setting the pace early on in the 20-minute session, the youngster topped the times for both races with Luke Pinder emerging as his nearest challenger in both sessions.

As temperatures ramped up at the Northamptonshire venue, round six proved to be an enthralling affair as soon as the lights turned to green. Launching his Renaultsport machine from pole position, Dorlin headed the field into Turn One however it was to be Sam Randon that posed the initial threat after jumping Pinder off the start.

Squeezed onto the outside of Deene hairpin, Randon filed in behind Pinder on the opening tour but the man to watch becme Brett Lidsey who was hustling his MRM machine through the field. As Dorlin began to stretch his advantage at the sharp end, Lidsey was the one to watch as he slipped past Ben Palmer for fourth and set off in pursuit of the front runners.

With Dorlin continuing to command proceedings, his Westbourne stablemate Randon provided no respite for Pinder heading into the Deene hairpin on lap six. Making contact with the rear of the Jade Developments driver, Randon edged his nose alongside the former road series champion but found himself in strife as Lidsey continued his charge to capitalise and relegate the Pembrey race winner to fourth, which would later become sixth as Palmer and Tom Barley mixed it for the podium spots.

Back at the front Dorlin took the chequered flag ahead of Lidsey, who passed Pinder late on, to limit the points buffer in the standings. In the road series, Nic Harrison put his recent bad luck that has struck at times this season to take a lights-to-flag victory. Heading the familiar trio of competitors, Harrison withstood early pressure from Sarah Franklin and Jack Fabby to begin clocking consistent laps times and pull away to take a second class victory of the season.

Overcast conditions greeted teams and drivers on Sunday in the morning making for an intriguing second race of the weekend. Looking to follow on from his Saturday heroics, all eyes were transfixed on Dorlin however they soon switched to Ben Colburn as he pulled off on the green flag lap due to a broken driveshaft.

As the lights went out a poor start from Dorlin handed Pinder the early lead with Randon bidding to overthrow him around the outside of the Turn One and onwards into the Deene hairpin. Dorlin settled for third and began his hunt of the top two whilst Lidsey followed on from his race one form by beginning to thread his way through the field.

Tyler Lidsey endured a spectacular incident as he dropped a wheel on the grass on the run down to Tarzan before slamming into the wall backwards - causing substantial damage but thankfully walking away unhurt. Back at the front Pinder continued to lead but it was to be Dorlin that piled the pressure on lights ablaze.

As Brett Lidsey slithered by Randon and tagged onto the lead duo, road class drivers began to fall into their eyeline as they approached lapping them. Franklin would be one less car to overtake due to a mechanical issue bringing her progress to a halt.

As the race entered the final stages, Fabby's Jade Developments machine full into the clutches of Pinder and Dorlin through Turn One, with both drivers picking a side each to go past the youngster. Dorlin, who went to the inside, appeared to have picked the correct route as he emerged with the lead with Lidsey also then moving into second to make it a repeat podium lockout.

Randon would cross the line in fourth after starving off the constant threat which was former BTCC competitor Barley with Palmer rounding out top six and race class drivers. Just as he had done in the first race, Harrison replicated what Dorlin achieved by taking a brace of wins, albeit it in the road class.

A non-finish from Franklin ultimately made no difference to the CGH Imports-backed who headed Fabby for all 12 laps to take his win tally to three.

James Dorlin: "That was a brilliant weekend - I couldn't have asked for me to come away with two poles and two wins. Race one was all about getting my head down and controlling the pace which I managed to do. In race two though I didn't get the best of starts and that made more work for myself. That turned out to be one of the most enjoyable races to date though. When we were lapping the road class the gap opened up and I just took my chance for the lead, I couldn't rest though as everyone was hounding me to the flag. I've had five wins now and the championship is obviously the target but I can't be complacent. The challenges will continue but I just need to keep plugging away."

Brett Lidsey: "Considering how qualifying went, to come away with a pair of second place finishes is really good. We played it smart in the opening encounter and then in race two I knew I had the pace but due to not having too many new sets of tyres I had to take my time on old rubber. I was praying that those ahead of me would get into a scrap and that is what happened in the end - after that we picked our moves carefully and made progress. We are in a strong position and need to keep chipping away."

Luke Pinder: "Two podiums is a great result but I am a little frustrated because the win was there for the taking in race two. I had a good start and was comfortable in the lead until we caught the road class then I just lost out to James who has been superb all weekend. I have to thank my team because we have made a lot of progress and everyone has done a great job. We can leave here very happy and with an idea of what needs to be done to move further forward."

Nic Harrison: "This year hasn't been the kindest to me in terms of luck but it is nice to finally get a solid weekend under my belt. I came here wanting to take two wins and that is what I have done. The early laps were all about trying to pull away from Jack (Fabby) and Sarah (Franklin), and once that was achieved I just had to focus on not making any mistakes and hitting every apex. Near perfect weekend and good to leave the circuit with some silverware."